Couple gets petrol, diesel as wedding gift in India 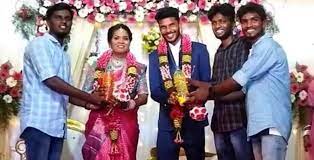 A video of a newly-married couple went viral after they received a litre of petrol and diesel each as wedding gifts from friends.

The viral video on Twitter sees three men standing on the stage. The friends, smiling ear to ear, posed for the camera while presenting the petroleum products to the couple Girish Kumar and Keerthaa. The married couple also found humour in the situation and were smiling.

According to an India-based news agency, the baffling yet humorous incident took place in Cheyyur town of Chengalpattu district in Tamil Nadu. The married couple accepted the gifts as well.

The video got thousands of views from Twitter users. However, there were mixed responses from them with some saying it is dangerous and illegal while others found it funny.

It is not the first time that such an incident took place. A newly-married couple received five litres of petrol as a gift at their wedding reception from comedian Mayilsamy.

He went up to the stage to congratulate the newly-wed couple, he gifted them with two plastic cans filled with petrol. This gift was assumed to be Mayilsamy’s jibe at the rising fuel prices in the country.