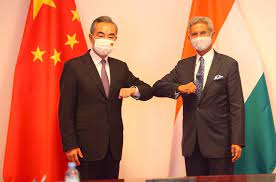 New Delhi: China and India offered different readouts of a meeting between their foreign ministers on Friday, with New Delhi stressing border disengagement as a precondition for normal relations and Beijing underscoring the need to join hands at the time of global turbulence with a view to making Asia’s future invincible.

The visit was wrapped in secrecy due to an unannounced stopover in Kabul en route, after arriving in New Delhi on Thursday evening. Foreign Minister Wang Yi held talks with his Indian counterpart Subrahmanyam Jaishankar and India’s National Security Adviser Ajit Doval on Friday.

Mr Wang proposed a three-point approach to India – both sides should view bilateral relations with a long-term vision, According to China’s Global Times, to see each other’s development with a win-win mentality, and take part in the multilateral process with a cooperative posture.

Mr Wang is the highest-level Chinese official to visit India since the border clashes at Galwan Valley. He told Mr Jaishankar that as mature, rational and major developing countries, China and India should not let the border issue define or affect the overall development of the bilateral relationship.

Global Times quoted Mr Wang as saying. That “China and India should support each other, not consume or exclude each other. The two sides should manage and control differences, and facilitate the development of bilateral relation

Mr Jaishankar, according to the paper, said that since last year, India and China have maintained effective diplomatic and military communication. After several rounds of military commander-level talks and border affairs mechanism meetings, troops of the two sides have achieved disengagement in most areas of the western sector of the border, and the disembarrassed in the remaining areas should be completed as soon as possible.

The Indian media offered a different emphasis. “There can be no normality in India-China ties unless the troops amassed at the Line of Actual Control (LAC) are withdrawn,” local reports quoted Mr Jaishankar as telling the visitor. Mr Jaishankar, according to The Hindu, said their meeting had a “broad and substantive agenda” and the talks were “open and candid”. He said he had “conveyed our national sentiment” on the border issue and that “frictions and tensions that arise from China’s deployments since April 2020 cannot be reconciled with a normal relationship between two neighbours”.

“If you ask me, is our relationship normal today, my answer to you is no, it is not, and it cannot be normal if the situation in the border areas is abnormal,” Mr Jaishankar replied to a question from The Hindu, referring to the LAC in eastern Ladakh, where around 100,000 Indian and Chinese soldiers remain deployed in forward areas. “Surely, the presence of a large number of troops there, in contravention of agreements, is abnormal,” he said.