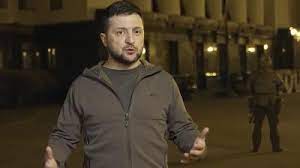 Kyiv: Ukrainian President Volodymyr Zelensky made an impassioned plea Thursday for citizens worldwide to pour into streets and squares in global protest against Russia’s invasion.

In a late-night television address from the emptied streets of his nation’s besieged capital Kyiv, a defiant but visibly tired Zelensky appealed in English for worldwide solidarity.

“The world must stop the war,” he said. “Come from your offices, your homes, your schools and universities, come in the name of peace, come with Ukrainian symbols to support Ukraine, to support freedom, to support life.”

His appeal came one month after Russian tanks rolled over the border, bringing a conflict that has killed untold thousands of civilians and soldiers on both sides.

More than ten million Ukrainians have already fled homes and cities under sustained Russian bombardment from land, sea and air.