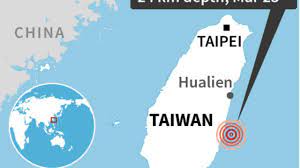 Taipei: A magnitude 6.7 earthquake that struck off the coast of Taiwan early Wednesday rattled buildings and roused people from their sleep, leaving one injured and causing a half-constructed bridge in the island’s east to collapse.

Taiwan is regularly hit by earthquakes as it lies near the junction of two tectonic plates. It does not issue tsunami warnings unless a quake registers at more than magnitude 7.0.

The US Geological Survey initially estimated the 1:41 am (1741 GMT Tuesday) quake to be magnitude 6.9, but downgraded it to 6.6 before finally assessing it back up to 6.7.

It also revised the depth from an initial 10 kilometres (six miles) to 24 km.

The quake hit off Taiwan’s east coast — near the island’s scenic tourist city Hualien — but was felt over much of the island.

Government-issued alerts sent people’s cell phones blaring, and social media lit up with people posting their reactions on being woken up.

“The chandelier on my ceiling shook for more than three minutes and didn’t stop,” local reporter Chao Li wrote on Facebook.

“It’s shaking so much, it scares people to death,” he said in an accompanying video.

An AFP reporter also felt their building in Taipei’s Zhongshan district shake a few minutes just after 1:41 am.

Local media on Wednesday ran footage from grocery stores that showed items flying off the shelves when the quake hit.

Taiwan’s National Fire Agency confirmed on its official Facebook page that a man in the southern county of Taitung was hit by glass and had been sent to hospital.

A bridge under construction in Hualien had also collapsed but there were no injuries as traffic was not allowed around the area, the agency said.

Popular for its beaches and hiking spots, Hualien saw a deadly 6.4-magnitude quake in 2018 which left 17 people dead and 300 injured.

“Please do not panic if there are aftershocks and we urge the residents to be prepared for disaster prevention,” the county government said in a statement on its official Facebook page.