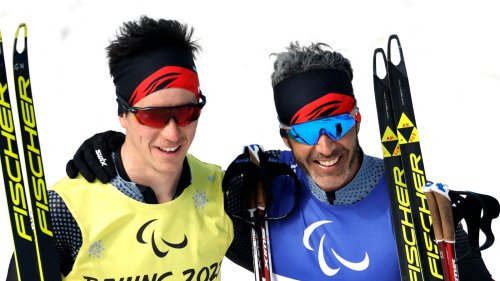 Zhangjiakou, China: Canada’s Brian McKeever has a chance to race into the history books and grab his 16th Paralympic gold medal in cross-country skiing at the Beijing Winter Games Saturday.

The 42-year-old has already bagged two titles in the visually impaired sprint and long-distance events this week at Zhangjiakou.

McKeever made his Paralympic debut at the Salt Lake City Games in 2002.

Beijing will be his last Games but he still has the middle distance race to go, which means a chance to equal the 16-gold-medal haul of German former para-alpine skier Gerd Schonfelder — the most decorated men’s Paralympian.

Norwegian cross-country skier Ragnhild Myklebust, 79, holds the record for most successful Winter Paralympian overall — 22 golds and 27 total medals over 5 games from 1988 to 2002.

McKeever played down the fuss over potentially reaching Schonfelder’s record.

“I will continue to not think about them and just keep going one race at a time and (try) to enjoy this,” he said earlier this week.

China’s wheelchair curling team had a disappointing start to their competition, losing their first couple of matches because of nerves and pressure to perform in front of a home crowd.

However, the team’s performance has bounced back and they were able to deny Canada a spot in the gold medal match at Friday’s semi-final.

Head coach Yue Qingshuang has taken to singing folk songs to her team before they play.

“I wanted the team to be able to relax and create some kind of atmosphere before the game, and help them perform their best,” she said.

The Canadian team has never missed a medal since the 2006 Turin Games, and at PyeongChang they also claimed bronze.

There are three gold medal chances in the women’s alpine skiing slalom — there are sitting, standing and visually impaired categories at Yanqing on Saturday.

In addition, Canada will square off against the US Sunday for the gold medal.