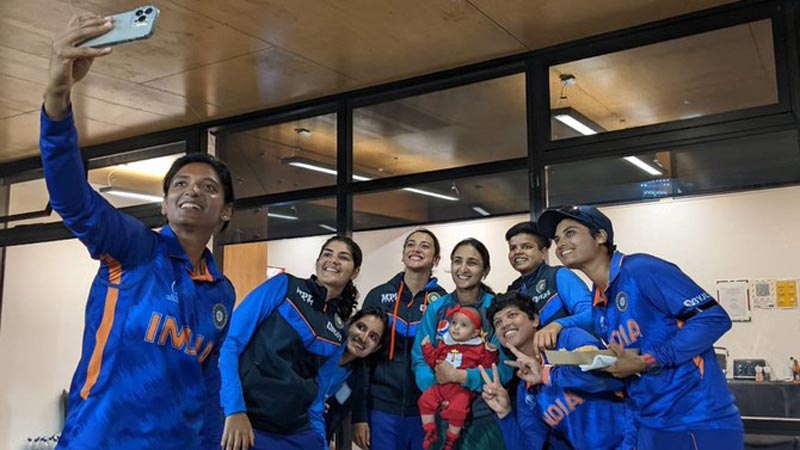 MOUNT MAUNGANUI: India vs Pakistan is always special, but this Sunday at the 2022 Women’s ODI World Cup was more so, thanks to a six-month-old member of Pakistan’s touring party. On the field, it was a dominant 107-run win for India, with Pooja Vastrakar, Sneh Rana and Rajeshwari Gayakwad calling the shots. Off it, it was all about Fatima. Pakistan captain Bismah Maroof’s daughter became the centre of attention after the game when the Indian players — Smriti Mandhana, Shafali Verma, Harmanpreet Kaur among them — just couldn’t have enough of the toddler. In no time, visuals of the interaction were all over the internet. Fatima, and her mother, had attracted attention even before the game. Photographs of Maroof entering the stadium in Mount Maunganui with her daughter cradled in one arm and one of her team-mates pushing the baby’s cradle became an instant source of delight. The images also spoke of women’s cricket breaking new ground. Maroof, after all, had become the first beneficiary of a bespoke maternity policy for players in the subcontinent, and Sunday’s fixture was her first competitive match since returning from maternity leave.

“Overall, it was a really different feeling coming back, in a World Cup, and playing a match,” Maroof said when asked how it felt to be back in the middle, this time as a mother. “I think I was a bit emotional. My mother and daughter are there. It was a special moment for me. I really want to make it count this tournament, because they both are here.” That 30-year-old Maroof was able to travel to New Zealand with her daughter — as well as her mother, Fatima’s carer — was also down to the PCB’s maternity rule, which provisions the mother “to travel with a support person of her choice to assist in caring for her infant child”, with travel and accommodation costs shared equally between the board and the player.

As such, the two teams, whether the women or the men, rarely play each other because of political differences between the two countries. They meet only at multi-nation tournaments, but as Nida Dar said after the game, the off-field camaraderie between the players has only grown over the years. “We get very few matches against India. But when the two teams do get to meet each other, we usually catch up and have a lot of good conversations between us,” Dar said. “Sometimes we chat about the match. Many of the players [from both teams] are good friends, too, so they talk among them about things beyond the matches as well.

“But the fact is, we have always shared a good bond between us, a good relationship between us, and we try to keep it that way and hopefully will do so in the future, too. Match ek side pe rehta hai aur dosti apni jagah pe hai (The contest has its place, our friendship has its place too). But we’ve always had healthy conversations. It felt very good when they (the Indian players) came over and spoke to us, and we chatted after the game, especially (about) Bismah’s baby, who loves being pampered and she does get pampered a lot. So she enjoyed (the attention), and so did we, the players.”