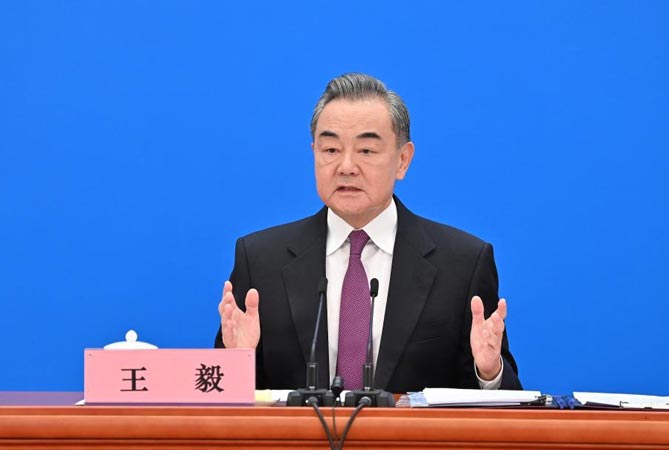 Calmness and rationality, instead of moves that pour oil on the flame and escalate tensions, are needed to resolve complex problems, State Councilor and Foreign Minister Wang Yi said Monday while elaborating on China’s position on resolving the Ukraine crisis.

Wang stressed the need to remain committed to the purposes and principles of the UN Charter and respect and protect the sovereignty and territorial integrity of all countries; to uphold the principle of indivisible security and accomodate the legitimate security concerns of relevant parties; to rely on dialogue, negotiation and peaceful means for dispute resolution; to aim for lasting peace and stability in the region and forge a balanced, effective and sustainable European security mechanism.

Wang made the remarks at a press conference on the sidelines of the fifth session of the 13th National People’s Congress. China is willing to continue playing a constructive role in facilitating dialogue for peace, and work alongside the international community to carry out necessary mediation, Wang said. The international community should focus their efforts on facilitating Russia-Ukraine talks and preventing large-scale humanitarian crisis, Wang said, noting that China has done some work while maintaining close contacts with relevant parties. China believes that the more tense the situation, the more important that the talks continue, and that the wider the disagreement, the greater the need to sit down and have negotiation, he said. Wang put forth a six-point initiative on preventing a large-scale humanitarian crisis in Ukraine.

Fourth, efforts should be made to guarantee safe and smooth humanitarian aid activities, including providing rapid, safe and unimpeded humanitarian access, Wang noted.

He also called for ensuring the safety of foreign nationals in Ukraine, allowing them safe departure and helping them return to their home countries. Sixth, support should be given to the UN’s coordinating role in channeling humanitarian aid and the work of the UN crisis coordinator for Ukraine, Wang added. Noting that China will continue its efforts to overcome the humanitarian crisis, Wang announced that the Red Cross Society of China will provide Ukraine with a batch of emergency humanitarian supplies as soon as possible.

Wang also expressed China’s gratitude to those countries that have offered friendly and valuable support in evacuating Chinese nationals from Ukraine. ?

The current cross-Strait tension was caused by Taiwan’s Democratic Progressive Party (DPP) authority who denied the one-China principle and attempted to change the status quo that both sides of the Taiwan Strait belong to one and the same China, he said, warning that these moves will ruin Taiwan’s future.