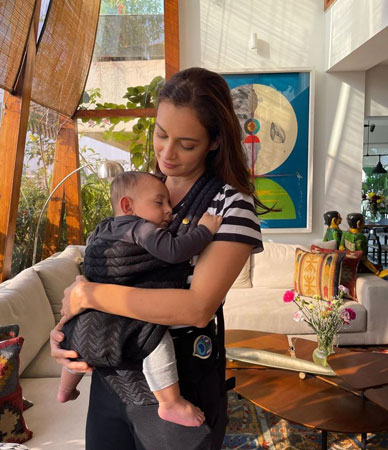 Bollywood star Dia Mirza is enjoying the motherhood phase after welcoming her first child, baby boy Avyaan with husband Vaibhav Rekhi and her social media posts are proof of the same.

The Rehna Hai Tere Dil Main actress, who often shares adorable photos and videos of her baby, has dropped a heartwarming picture of her little munchkin.

In the shared picture, little Avyaan is seen peacefully sleeping in his carrier while resting his head on Dia. Sharing the perfect frame, she simple wrote ‘Imagine’ in the caption, followed by a globe and heart emoticon.

She also tagged her husband Vaibhav in the post. Soon after she shred the picture, Dia’s friends from the industry took to the comments section and expressed their love for the little one.

Dia and Viabhav welcomed baby Avyaan in May last year.