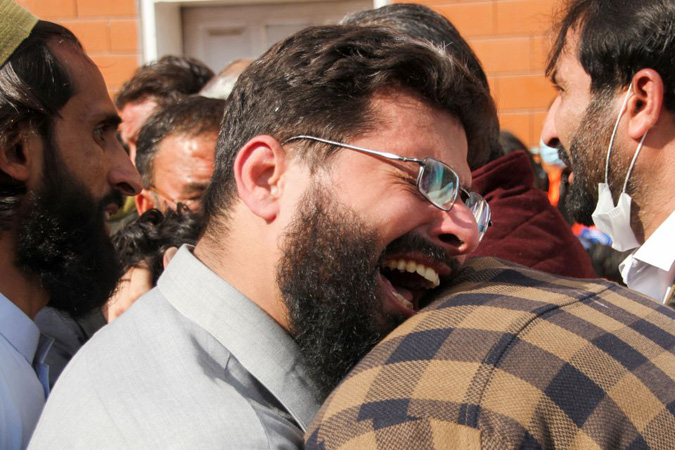 At least 57 people were killed and 194 wounded Friday by a suicide bomb at a Shia mosque in Peshawar, the deadliest attack in the country since 2018.

The blast tore through the Kocha Risaldar area of the city moments before Friday prayers were to start, shattering the interior and showering the streets with broken glass.

Muhammad Asim Khan, a spokesman for Peshawar’s Lady Reading Hospital, said the death toll had climbed to 57, the deadliest since a July 2018 blast – claimed by the local chapter of the Islamic State group – killed 149 people at an election rally. He said 50 of the wounded were in “critical condition”.

Muhammad Ali Saif, a spokesman for the Khyber Pakhtunkhwa provincial government, told AFP the blast was a “suicide attack” and numerous witnesses recounted the moment of detonation.

Ali Asghar saw a man enter the mosque before Friday prayers and open “fire with a pistol”, picking out the worshippers “one-by-one”. He “then blew himself up”, Asghar said. “I saw a man firing at two policemen before he entered the mosque. Seconds later, I heard a big bang,” said another witness, Zahid Khan.

An AFP reporter saw body parts strewn at the blast site, where desperate family members were held back by police. 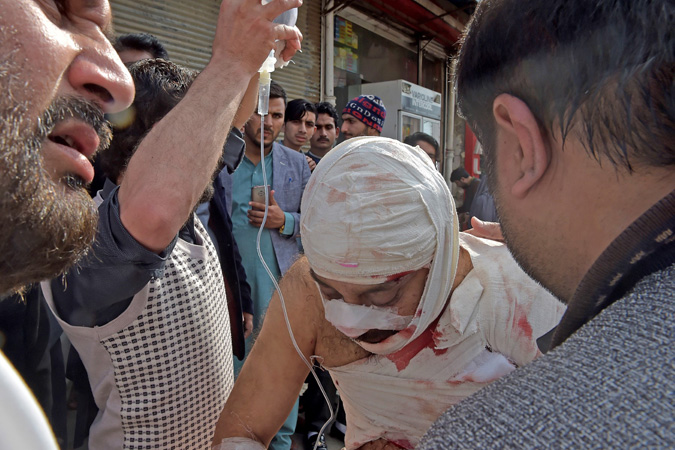 Peshawar police chief Muhammad Ijaz Khan told AFP two attackers were involved. He said two police officers were shot at the entrance of the mosque. “One policeman died on the spot while the other was critically injured,” he said.

The spokesman for Lady Reading Hospital said an emergency was declared at area hospitals, as the wounded were brought in. No group immediately claimed responsibility for the bombing. 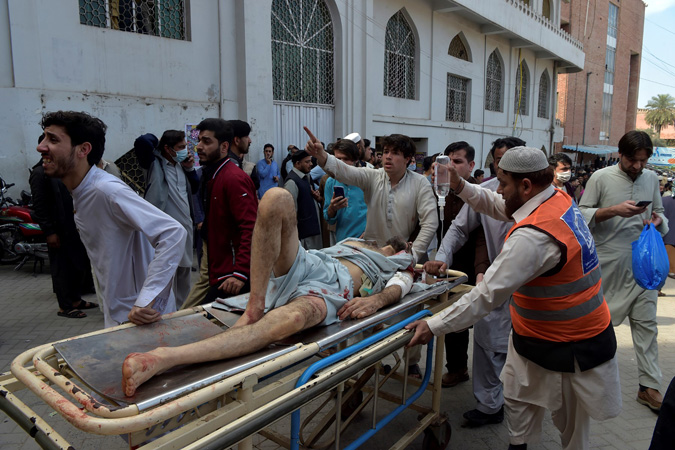 Sardar Hussain, who lost three relatives in the blast, said the mosque was the only place of worship for the Shia community in Peshawar’s old city. “Panic spread among the worshippers when the firing started. I ran to save my life,” one man, who did not give his name, told Reuters at the hospital, where he was being treated for his injuries. “Suddenly a man came in and started firing… He shot many people (and) then closed his eyes and blew himself up. After that, I have no idea what happened,” he said.

The suicide bomber had strapped a powerful explosive device to his body, packed with 5 kilograms (12 pounds) of explosives, said Moazzam Jah Ansari, the top police official for Khyber Pukhtunkhwa province. The device was hidden beneath a large black shawl that covered much of the attacker’s body, according to CCTV footage. The footage showed the bomber moving quickly up a narrow street toward the mosque entrance. He fired at the police protecting the mosque before entering inside. Within seconds, a powerful explosion occurred and the camera lens was obscured with dust and debris. Ansari said the crudely made device was packed with ball bearings, a deadly method of constructing a bomb to inflict the most carnage spraying a larger area with deadly projectiles. The ball bearings caused the high death toll, Ansari said.

Local police official Waheed Khan said the explosion occurred as worshippers had gathered in the Kucha Risaldar Mosque for Friday prayers. There are fears the death toll could still rise further, he added. Ambulances rushed through congested narrow streets carrying the wounded to Lady Reading Hospital, where doctors worked feverishly.

Shayan Haider, a witness, had been preparing to enter the mosque when a powerful explosion threw him to the ground. “I opened my eyes and there was dust and bodies everywhere,” he said.

At the Lady Reading Hospital Emergency department, there was chaos as doctors struggled to move the many wounded into operating theaters. Hundreds of relatives gathered outside the emergency department, many of them wailing and beating their chests, pleading for information about their loved ones.

The prayer leader, Allama Irshad Hussein Khalil, a prominent up and coming young Shiite leader, was among the dead. Throughout the city, ambulance sirens could be heard.

Retired army officer Sher Ali who had been inside the mosque at the time of the explosion was injured by flying shrapnel. He made a impassioned plea to the Pakistani government for better protection of the country’s minority Shias. “What is our sin? What have we done? Aren’t we citizens of this country?” he said from inside the emergency department, his white clothes splattered with blood.

Iran’s Foreign Ministry condemned the attack, saying the perpetrators were intent on “sowing discord among Muslims.” In a statement on the ministry’s website, spokesman Saeed Khatizadeh expressed his hope that Pakistan’s government puts an end to such attacks with “firm actions,” without elaborating. 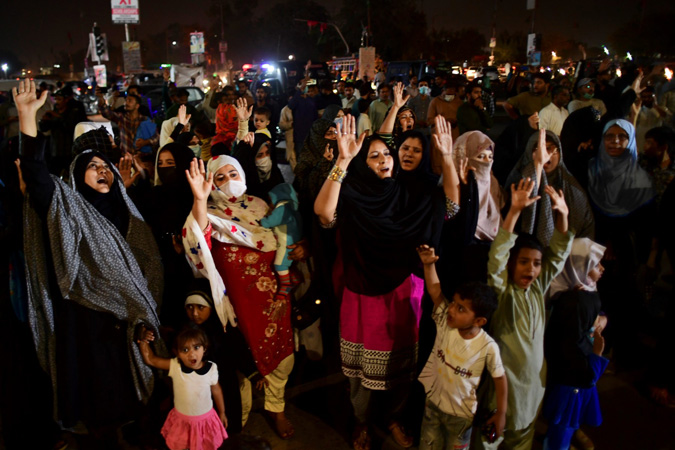 Taliban spokesperson Zabihullah Mujahid also condemned the attack on a mosque in Peshawar and said that there is “no justification” for attacking people in places of worship.

Taking to Twitter, Mujahid said the Taliban government in Afghanistan strongly condemned the reported suicide bombing that took place at a mosque in Peshawar that killed more than 50 people and injured scores of others.

“There is no justification for the attack on citizens and worshippers,” said Mujahid, who is also the acting deputy culture and information minister of Afghanistan. 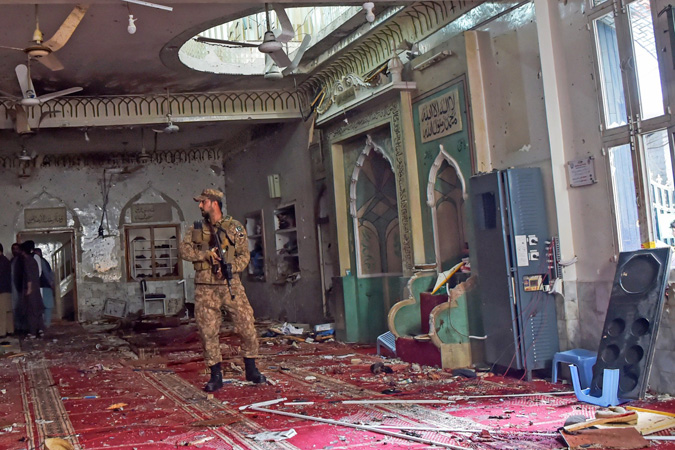