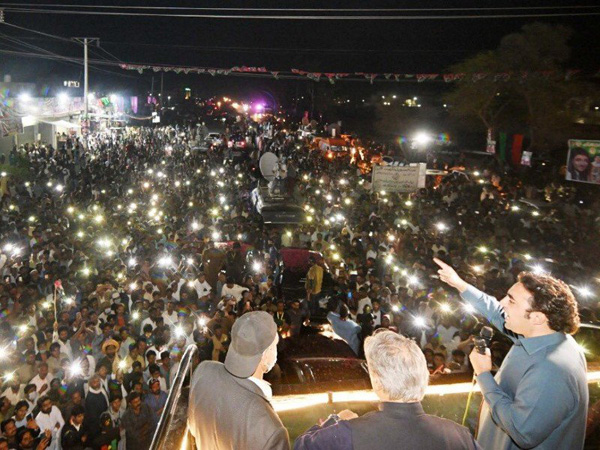 Calling Prime Minister Imran Khan a “coward”, Pakistan People’s Party (PPP) chairman Bilawal Bhutto Zardari has said that the “puppet” premier thinks that he will be able to frighten the people of Pakistan through NAB and PECA Ordinance but he is wrong as jiyalas (PPP workers) and the brave people of Pakistan will not be frightened, a private TV channel reported.

“Rather, this puppet is a coward who is terrified and his legs are trembling,” Bilawal said while addressing a charged crowd in Khanewal as his party’s Awami March reached the Punjab town on Friday. He said that the march had started on February 27 and the numbers of participants are increasing exponentially because we are struggling for the rights of the poor people of Pakistan.

“He (Imran Khan) used to say that he cannot give relief to the people because inflation is a global phenomenon but under the pressure of this march he had to reduce the price of petrol and electricity,” he reiterated. Bilawal said that PM Imran used to call everyone a thief but he himself proved to be the “biggest thief of sugar, flour, gas, petrol, water, fertiliser and other commodities”, adding that Imran Khan was “murdering” the poor grower of this country.

He said that when PPP co-chairman and former president Asif Ali Zardari took charge in 2008, Pakistan was importing wheat, rice and sugar but the PPP government helped the farmers and within one year the country became exporter of sugar, rice and wheat. “Selected Imran economically murdered the farmers and we are going to Islamabad to hold him responsible of his crime.”

Bilawal said that the puppet Imran Khan is a “coward who will flee to London” but we have to live among the people. He asked the people to support and participate in the long march so that the PPP can change the fate of the country and end this “destruction” caused by Imran Khan.