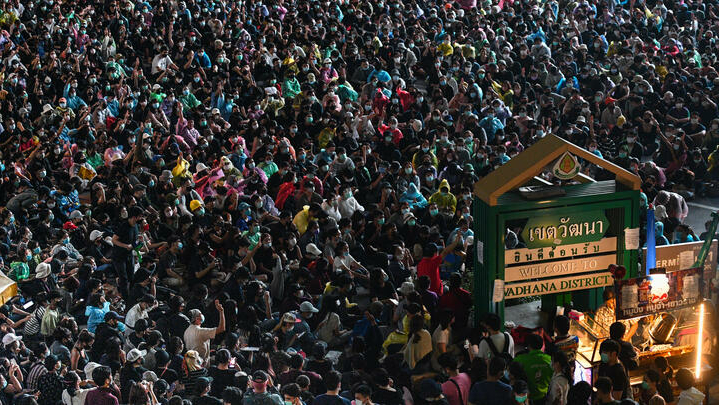 Bangkok: A Thai man was sentenced to two years in jail on Friday for violating the country’s tough royal defamation laws by putting a sticker on a portrait of Thailand’s king during 2020’s huge democracy rallies.

It is the first sentencing from lese majeste charges related to the protests, Thai Lawyers for Human Rights (TLHR) said, when thousands marched demanding the resignation of Prime Minister Prayut Chan-O-Cha and made unprecedented calls for reform to the nation’s untouchable monarchy. But the movement petered out as Covid-19 case numbers surged and authorities detained most of its leaders.

Narin, whose last name was withheld, is among some 160 activists hit with criminal charges under Thailand’s tough royal defamation laws — which carry a prison sentence of up to 15 years per charge. The criminal court jailed him for two years for violating Section 112 of the Thai Criminal Code after he posted a ‘GuKult’ sticker on King Rama X’s portrait outside Bangkok’s Supreme Court during a rally in September 2020.

‘GuKult’ is a satirical and anti-establishment Facebook page. “This could be an example of prosecuting the other 112 cases going forward,” said TLHR’s Kittisak Kongthong, defending the 31-year-old. He noted the case had been “accelerated”, with the court ordering “no testimonies of academics and the plaintiff.” Narin’s sentence was reduced from three years to two, and he can appeal within 30 days.

He was released on a 100,000 baht ($3,000) bail bond. He is still facing at least two further lese majeste charges, according to his lawyer. The sentencing comes after a number of prominent pro-democracy protest leaders were released on bail last month. Parit Chiwarak, better known in Thailand by his nickname “Penguin”, is facing 23 lese majeste charges but was allowed to free ahead of trial on February 24. Days later, 37-year-old Anon Numpa, a prominent Thai human rights lawyer, was also released on bail.