Ushna set to share screen with her ‘mother’s first-born’ 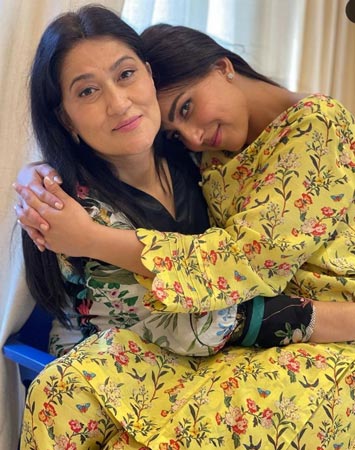 Pakistan’s talented actor Ushna Shah is ready to share the screen with her half-sister Irsa Ghazal for the first time, as announced on Instagram.

Taking to Instagram on Wednesday evening, Ushna shared a bunch of pictures with her half-sister, the veteran actor Irsa Ghazal to announce their first project together. “Day 1 with my Day-one,” she noted in the caption.

“Shot my first scene of new serial with my mother’s first-born. Our first drama together,” she captioned the six-picture gallery on the photo and video sharing site, further disclosing it is rather her third project with the ‘Ruswai’ actor.

“First was when mama was expecting me & her and Irsa worked together and the second was when I played a kidnapped baby at 6 months old,” the ‘Bewafa’ star mentioned, further lauding the veteran.

Dressed as sunshine in a bright yellow matching floral separates from celebrity twins Aiman and Minal Khan’s apparel brand, Ushna can be seen sitting in elder sister’s lap in one of the pictures as the two wrapped their arms around for a warm hug.

The pictures which received numerous hearts from her millions of Instagram followers also had compliments from fellow actors like Sanam Jung, Aiman Khan, Minal Khan, and Sadaf Kanwal.

Ushna is one of the top names of Pakistan’s showbiz industry, with hit projects like ‘Cheekh’, ‘Balaa’ and ‘Bewafa’ to her credits, along with a special appearance in the blockbuster movie ‘Punjab Nahi Jaungi’ and a recent outing in British-Indian musician Manj Musik’s song ‘Kangna’.

Furthermore, the versatile actor is set to feature in the Pak-Turk joint drama series based on the life of Salahuddin Ayubi, a Muslim leader.