Veena and Mishi talk living life on their own terms

* When Ahsan asked Veena why she often disappears from the limelight for extended periods of time, she shared, 'I think a few people can relate to my situation' 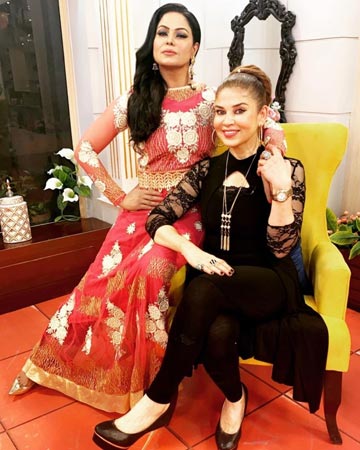 Actors and TV hosts Veena Malik and Mishi Khan recently sat down for a casual chat with Ahsan Khan, with the duo shedding light on their respective journeys to where they find themselves today.

Veena, who often makes headlines due to her controversial views and turbulent personal life, expanded upon her rediscovery of religion, and how she finds herself to be a much better person now than who she used to be, while Mishi spoke candidly about growing weary of the acting profession and switch to live shows.

When Ahsan asked Veena why she often disappears from the limelight for extended periods of time, she shared, “I think a few people can relate to my situation. The problem with falling in love with something is that one day you wake up and you’re not in love with it anymore. You don’t feel like doing that project anymore. What do you do then?” She added, “When I feel like a project I am working on is becoming bigger than the brand Veena Malik, I get sceptical of it and leave.”

Shifting the focus to Mishi, the host inquired why the Uroosa actor went from acting to working in an airline and then back to acting, eventually settling into the world of live shows instead. To this, she responded, “People think things happen all of a sudden, but that’s not the case. My life has progressed slowly, just like theirs. I worked in an airline for six or seven years.”

Explaining how she likes to “go with the flow”, Mishi added, “When I came back, I didn’t have the disposition to work from 10 in the morning to 10 at night with people repeatedly telling me to shoot one more scene before I can have a meal. I didn’t want to go through that, which is why I opted for a live show.”

Expanding on the relative ease of live shows, Mishi continued, “You work for a few hours with full energy, wrap up and go home. You work with full commitment. It’s not like busting dance moves all day and not getting a lunch break till night time, and when you do you’re being rushed to start another scene.” The actor also cited the constant delay in payments that come with being an actor as a reason behind her aversion towards the profession.

Currently hosting The Mishi Khan Show, the actor explained how a lack of decent roles and the industry’s beauty standards led her to make the switch. She shared, “It’s also about evolving as a person. I can’t just be an actor and keep playing the same old roles of the maasi, phuppi or bhabi. Always making the same miserable face and saying lines like, ‘You have wronged me.’ Also, since I’m good looking and have maintained myself, why are you constantly telling me to apply whiteners? I’d rather slap you in the face.”

Speaking about her shift towards more religious content and her admiration of Maulana Tariq Jamil, as well as her move back into showbiz, Veena shared, “I’ve just signed one project, and that hasn’t even started shooting yet. I have been working on my own terms. In fact, not just work, I have been living my life on my own terms, and there’s a price we have to pay for that.”

On the blurred line between culture and religion, Veena added further “In our society, culture has dominated religion. People think shalwar kameez is our religious attire. The person who wears shalwar kameez is a religious person and the person who wears jeans isn’t. That’s not right. These are cultural things, and people make celebrities’ lives a living hell because of them.”

Elaborating on her move to hosting a Ramazan show, Veena explained, “Ever since I was a child, my connection with God has been very strong. I’ve taken a lot of breaks in my career because I always felt guided by God. When I met Maulana Tariq Jamil, I was very impressed by him and I wished to change my lifestyle. Not just because of him though, since I’ve been inclined towards religion since I was a child.”

She continued, taking issue with celebrities who quit acting and immediately switch to preaching religion, “I spent a lot of time getting a religious education. There’s a perception that the minute you quit showbiz, you can start preaching religion the very next day. That’s not the case. There is education involved. I have read the entire Quran, but I don’t have the confidence to explain any verses or hadith with confidence.

On the harshness with which celebrities are treated, Veena began, “There are two types of sinners. Those who sin against God and those who sin against people. When it comes to God, it’s about how many religious commandments you are following. This is strictly between you and God. As far as people are concerned, it’s about being a fine person. Not taking advantage of anyone, not taking what isn’t yours.”

She continued, asserting the need to let religion be a private practice, “People can be so brutal when it comes to celebrities.

They don’t understand that the celebrity hasn’t done them any wrong personally. Certain things are between God and the person. People shouldn’t try to play God. My appearance may be different, but I am a much better person now than who I used to be.”