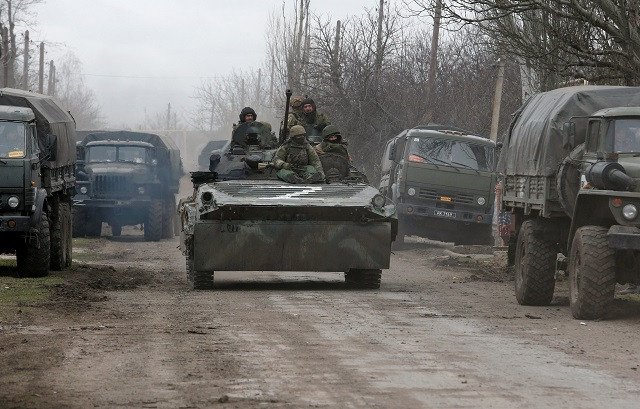 KYIV: Ukrainian authorities on Thursday confirmed the loss of Kherson – the first major Ukrainian city to fall in a devastating week-old war – a day after Russian forces claimed to seize the city, with a further breakout of the attacking forces anticipated in the south of the country.

The capture of the Black Sea city of 290,000 people, which just last year hosted NATO-supported war games, appeared a significant boost for Moscow as it readied for potential ceasefire talks on Thursday.

After a three-day siege that left Kherson short of food and medicine, and struggling to collect and bury its dead, the town’s mayor also announced he was in talks with “armed guests.”

He had “made no promises” to the Russian forces, but agreed to a night curfew and restrictions on car traffic.

Russia continues to make significant advances on the southern front, with troops breaking through in Kherson — opening the path west and north — and besieging the larger strategically vital port city of Mariupol.

There, mayor Vadym Boychenko reported hours of bombardments that trapped civilians in a city now without light, water or heating as temperatures hover around freezing.

“Today was the hardest, cruellest of the seven days of this war,” he said. “Today they just wanted to destroy us all.”

Moscow’s victory in Kherson comes one week after Russian President Vladimir Putin’s army marched into Ukraine from the north, east and south, training a vast arsenal of weaponry at Ukrainian cities.

Russian forces have sporadically bombarded civilian targets across the country, including the capital Kyiv and the majority Russian-speaking second city of Kharkiv, which is now coming under more intense attack.

Ukrainian President Volodymyr Zelensky has called the barrage of missiles, shells and rockets a “war crime” and the International Criminal Court has confirmed an investigation is underway.

Amid violence that has kindled memories of Europe’s blood-soaked past, one million Ukrainians have now fled across the border into neighbouring Poland, Slovakia, Hungary, Romania and Moldova, according to the UN refugee agency’s rapidly rising tally.

A senior US defence official claimed the massive column of Russian military vehicles amassed north of Kyiv had “stalled” due to fuel and food shortages.

Russian authorities had been silent on the toll of the invasion, and have a domestic media blackout on what the Kremlin euphemistically calls a “special military operation”.

But the Ministry of Defence on Wednesday acknowledged for the first time that 498 soldiers had “died in the line of duty”.

Ukrainian forces put the Russian toll at 10 times that number. The true figure is not known.

“Hundreds if not thousands of civilians have been killed or wounded,” claimed the secretary of state, who will travel to eastern Europe next week to shore up support for Ukraine — and for efforts to secure a ceasefire.

Kyiv is sending a delegation to the Thursday ceasefire talks, at an undisclosed location on the Belarus-Poland border, but has warned it would not accept “ultimatums”. Western countries have already imposed heavy sanctions on Russia’s economy and there have been international bans and boycotts against Russia in everything from finance to tech, from sports to the arts. EU and NATO members have already sent arms and ammunition to Ukraine, although they have made clear that they will not send troops and the EU has dampened Zelensky’s hopes of membership of the bloc.