ISLAMABAD: The Foreign Office on Wednesday said the social media accounts of Pakistan’s embassy in Algeria have been “hacked” and the posts did not belong to the mission.

It further mentioned that all recent messages posted through those accounts were not from Pakistan’s embassy in Algeria. The FO’s statement came after social media posts from the embassy said that all missions of the country were allegedly “ordered to divert funds to Ukraine for evacuating Pakistani nationals.”

It further claimed that no Pakistani nationals had been evacuated from war-hit Ukraine and that the embassy did not have funds to pay its employees. 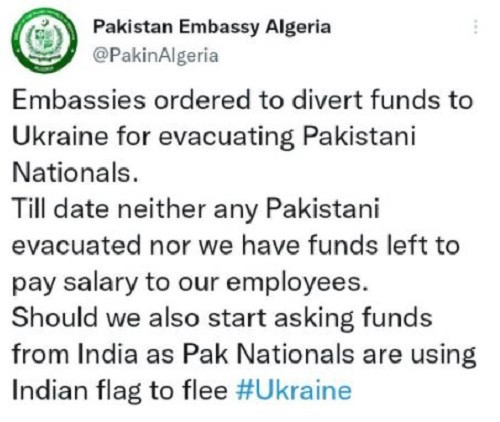 The said post questioned if the embassy should turn to India for funds as Pakistani nationals were “using the Indian flag to flee”.

Last year, the official Twitter handle of Pakistan’s embassy in Serbia criticised the PTI-led government over record-breaking inflation and alleged non-payment of salaries for the past three months. However, the Foreign Office spokesperson, in a tweet, claimed that Twitter, Facebook and Instagram accounts of the country’s mission in Belgrade were “hacked”.