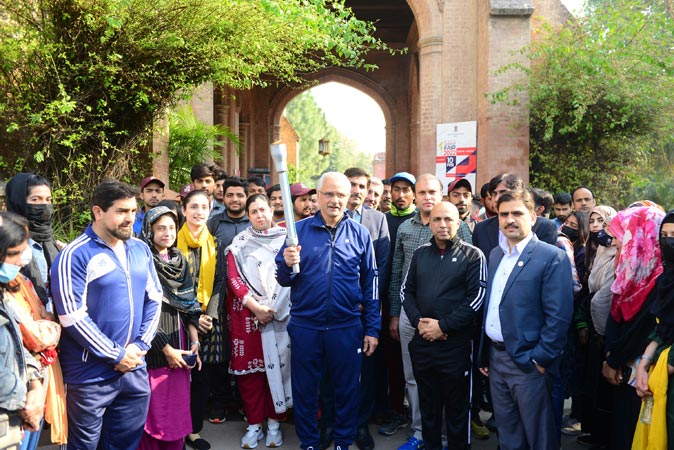 LAHORE: Ravians cheered and waved the flag of Government College University Lahore as a torch relay for the 121st Annual Sports kicked off on Tuesday under the University’s Clock Tower.Vice Chancellor Prof. Dr. Asghar Zaidi lit a spiral-shaped torch and rallied his sportsmen to the University’s Science Block, where he handed over the torch to the members of GCU Sports Board for its onward journey to the University’s New Campus in KSK. The Vice Chancellor also joined the Relay in the New Campus and distributed prizes to the winner of inter-departmental games. Speaking on the occasion, Prof. Zaidi said the Torch Relay heralds the start of the GCU 121st Annual Games and transmits a message of peace, courage and friendship along its route. The Relay would conclude at the inaugural ceremony of GCU Annual Sports at the Punjab Stadium on March 03, 2022 where this Torch would be handed over to Special Adviser to the Prime Minister on Youth Affairs Usman Dar.He expressed gratitude to Usman Dar for giving GCU a platform to contribute to the initiative of Prime Minister Imran Khan to promote sports under the KamyabJawan Drive.