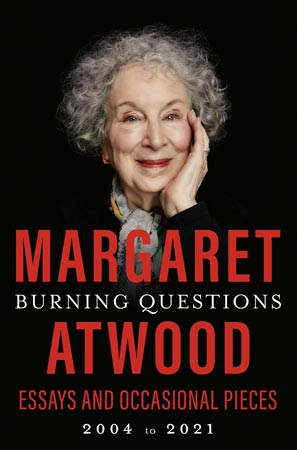 Canadian poet, novelist and literary critic Margaret Atwood’s diverse and intense interests in subjects from feminism to climate change are on full display in her latest book, a collection of some 50 shorter pieces of her writing.

“Burning Questions: Essays and Occasional Pieces, 2004 to 2021” pulls together writings that range from the funny to the frightening, posing questions such as, “How much of yourself can you give away without evaporating?” and “Why do people everywhere, in all cultures, tell stories?”

The pieces include a 2015 essay reflecting on “The Handmaid´s Tale,” Atwood’s dystopian novel about women subjugated by a patriarchal and totalitarian state. The book inspired a popular TV series years later.

In an essay on the book’s 30th anniversary, Atwood reveals she delayed writing it, worried that it would be considered “too far-fetched.”

She also notes that the book inspired by the rise of the religious right in the U.S. was initially dissed in a New York Times review by American novelist and essayist Mary McCarthy. But years later, her handmaid became so popular she joined the Klingons, the Hulk, Minnie Mouse and Wonder Woman as a favorite Halloween character.

Atwood humorously discusses the writing life in another essay, describing how real life can intrude on the process, such as when as she sets aside work on a speech for a friend’s birthday party to watch the winter birds from a cabin window and to search for a lost recipe box.

Atwood ponders the future of the arts during Donald Trump’s presidential administration, saying his interest in the arts was probably “somewhere between zero and negative-10.” Another piece reflects on the legacy of Rachel Carson´s “Silent Spring” a half-century years after its release.

Now 82, Atwood clearly has a lot of material to draw from. She has written dozens of books of non-fiction, poetry and fiction including the novels “Cat´s Eye,” Alias Grace,” and “The Blind Assassin.” In between, she has written an average of 40 essays and shorter pieces annually.