* Ukraine says over 350 civilians killed since the Russian invasion began 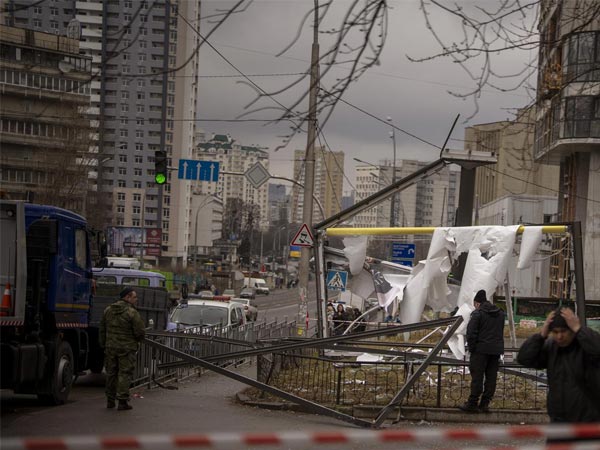 Russian forces stepped up attacks on cities across Ukraine Tuesday and warned they would target security buildings in the capital Kyiv, as the West promised more devastating sanctions and the UN appealed for $1.7 billion for urgent aid.

As Moscow intensified its offensive six days since the invasion began, Ukraine’s second city, Kharkiv, said the Russian army had fired on its local administration building with missiles, killing at least 10 people.

An AFP reporter saw rescue workers carrying a body out of the building, which was surrounded by debris and whose windows were completely shattered. “This is state terrorism on the part of Russia,” said Ukrainian President Volodymyr Zelensky, who also reiterated his urgent appeal for his pro-Western country to join the European Union. In a video address to the European Parliament, he said: “Prove you are with us, prove you are not abandoning us and you are really Europeans”.

Officials said more than 20 people were also wounded in Kharkiv in northeast Ukraine and 10 more people discovered alive under the rubble. The International Criminal Court has already opened a war crimes investigation against Russia and EU foreign policy chief Josep Borrell said the most recent attack “violates the rules of war”. In southern Ukraine, the city of Mariupol on the Azov Sea was left without electricity after bombardment, while Kherson on the Black Sea reported Russian checkpoints encircling the city. In a key strategic victory for Moscow, Russia’s defence ministry said its troops had linked up with the forces of pro-Moscow rebels from eastern Ukraine in a region along the Azov Sea coast. Russian President Vladimir Putin has “shattered peace in Europe”, NATO chief Jens Stoltenberg said during a visit to an airbase in neighbouring Poland.

“Russia’s aim is clear — mass panic, civilian victims and the destruction of infrastructure. Ukraine is valiantly fighting back,” Mykhailo Podolyak, an adviser to Zelensky, said on Twitter. Ukraine says more than 350 civilians, including 14 children, have been killed since the Russian invasion began. New Delhi said an Indian student was among the victims, killed by shelling in Kharkiv on Tuesday. More than 660,000 people have already fled abroad, the UN refugee agency said, estimating that a million people are displaced within ex-Soviet Ukraine, which has a population of 44 million.

The UN estimates that four million refugees may need help in the coming months and 12 million more will need relief within the country. Russia has defied international bans, boycotts and sanctions to press ahead with an offensive which it says is aimed at defending Ukraine’s Russian speakers and toppling the leadership.

Defence Minister Sergei Shoigu said Russia would continue “until set goals are achieved” after initial ceasefire talks between Moscow and Kyiv failed to secure a breakthrough. He vowed to “demilitarise and de-Nazify” Ukraine and protect Russia from a “military threat created by Western countries”. Western powers are planning more sanctions in response. Former Russian president Dmitry Medvedev, the deputy head of Russia’s Security Council, hit back saying “don’t forget that in human history, economic wars quite often turned into real ones”.

Russia on Tuesday urged Kyiv residents living near infrastructure linked to Ukrainian intelligence to evacuate and fears are growing of an all-out assault to capture Kyiv — a city of 2.8 million people. Satellite images provided by US firm Mazar showed a 65-kilometre (40-mile) long build-up of armoured vehicles and artillery north of the city. Zelensky said defending the city was now “the key priority for the state”.