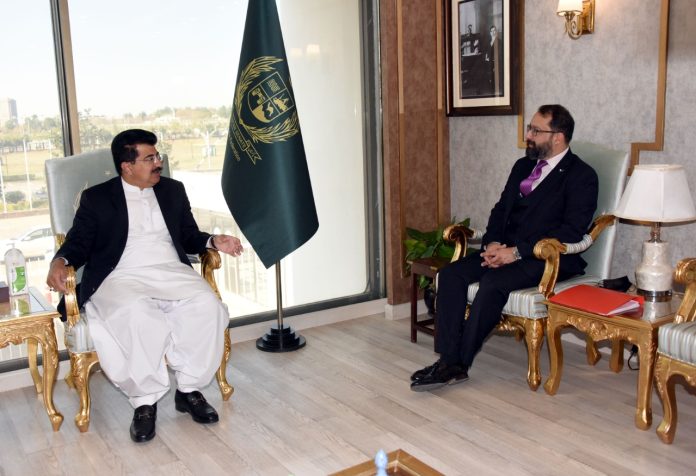 “Pakistan desires for remarkable relations with African Countries under ‘Engage Africa’ Policy”, he said while talking to Pakistan’s newly-designated Ambassador to Zimbabwe, Murad Baseer, who called on him at Parliament House, said a news release.

The Chairman felicitated the newly-designated Ambassador with best wishes for his future endeavours and assignments. During the call-on, Sanjrani underlined the excellent bilateral linkages with Harare that predate Zimbabwe’s Independence. The meeting discussed ways for enriching connections with Zimbabwe and other African Nations.

There are substantial investment opportunities in Pakistan and efforts should be made to draw the attention of the Zimbabwean and African investors through effective diplomacy towards Pakistan’s friendly investment policies, he added.

Murad Baseer, the newly designated envoy to Zimbabwe thanked Sanjrani for the best wishes and reiterated his commitment to effectively represent Pakistan’s soft image at the international fora.

While discussing bilateral ties with Zimbabwe, Chairman Senate also highlighted Pakistan’s assistance in the establishment of the Zimbabwe Air Force after its independence. Discussing the bilateral trade between the two countries US 18.41 million dollars (2021), Sanjrani urged to encourage B2B (Business-to-Business) interaction for improved bilateral trade.

Sanjrani underscored that Pakistan’s export to Zimbabwe in 2019 stood at 10.4 million dollars that could be elevated, adding that productive measures needed to be taken to increase Islamabad’s export to Harare.