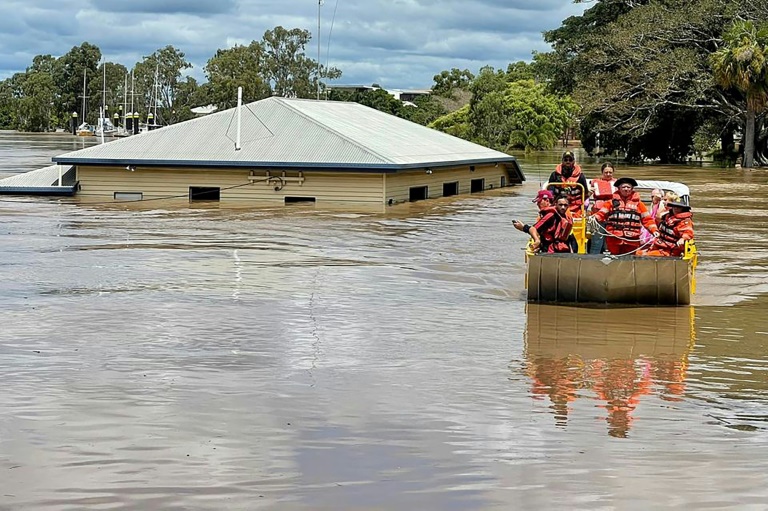 Flood warnings were in effect for dozens of areas across the states of Queensland and New South Wales, where a week-long “rain bomb” has dumped a metre (3.2 feet) of water on some areas in a week.

Several waterways have already burst their banks or broken through levees, inundating towns and forcing residents to flee or seek safety on higher ground.

Nine people have died and more than a thousand people have been rescued. Authorities have warned that more fatalities are likely.

The latest victim was a woman in her 80s, whose body was found by police inside a home in the country town of Lismore.

“She is yet to be formally identified,” said New South Wales Police.

In the usually laid back surf town of Byron Bay, Hannah Leser spent the weekend celebrating her wedding with 150 guests.

But the new bride and groom are now spending their honeymoon rescuing friends stranded in the nearby towns of Ballina and Mullumbimby in a borrowed four-wheel-drive.

Some 30 people are camped at the house where they were to spend their honeymoon.

“It’s chaos but all of our friends and family are safe,” she told AFP. “This is not quite the honeymoon I expected but it is what it is.”

Elsewhere, a military helicopter performed a daring aerial rescue, plucking two people to safety as muddy waters lapped at the corrugated metal roofing of their home.

Live television images on public broadcaster ABC showed a rescuer sitting on the roof with the pair, preparing to strap them to the chopper’s winch.

Emergency services were overwhelmed by calls for help and flotillas of makeshift rescue boats fanned out across the town as people tried to ferry their neighbours to safety.

In the town of Lismore, local member of parliament Janelle Saffin had to swim to safety after she was stranded in the floodwaters.

“We went to the verandah, hanging on to the rafters,” she told Nine Newspapers.

Local resident Danika Hardiman was rescued Monday after she woke up to find flood waters had reached the balcony of her second-floor apartment in the town’s main street.

She and her partner managed to climb up to the roof and were eventually rescued by “two guys in a boat, two locals”, she told AFP, describing the scenes in Lismore as “horrific”.

“Imagine you’re in a boat sailing past people’s roofs,” she said.

Near the town of Grafton, buildings were submerged almost to roof level, roads were washed away and cattle roamed abandoned.

Further south in Sydney, residents endured another day of torrential downpours, and were warned to brace for “major flooding”.

Australia has been on the sharp end of climate change, with droughts, deadly bushfires, bleaching events on the Great Barrier Reef and floods becoming more common and more intense as global climate patterns change.