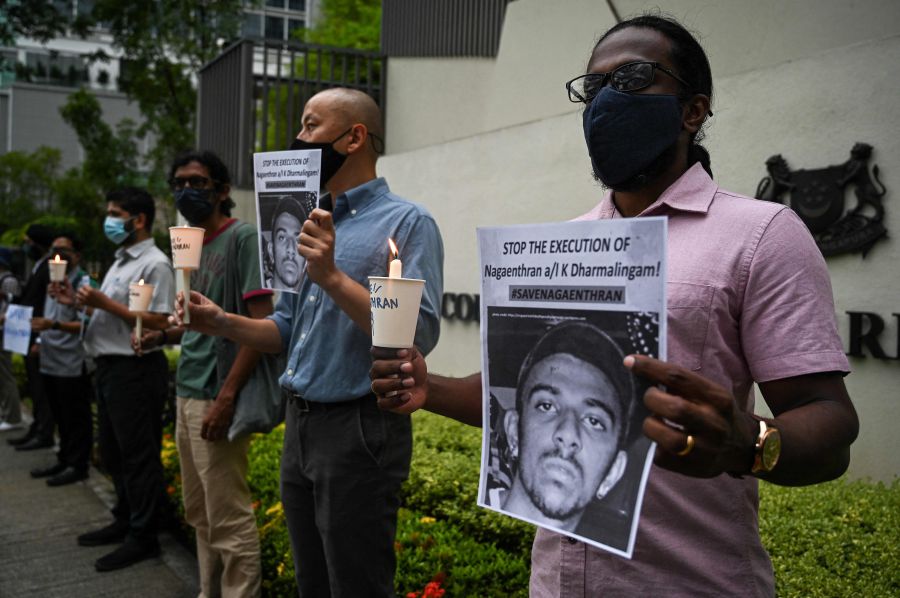 Singapore: Singapore’s top court was Tuesday urged to show “mercy” as it heard the last-ditch appeal of a Malaysian man facing execution despite criticism from supporters who say he is mentally disabled.

Nagaenthran K. Dharmalingam was arrested in 2009 for trafficking a small amount of heroin into the city-state, which has some of the world’s toughest drugs laws, and handed a then mandatory death sentence the following year.

He was finally scheduled to be hanged in November but the plan sparked criticism due to concerns he has intellectual disabilities, with the European Union and British billionaire Richard Branson among those condemning it.

The 34-year-old lodged a final appeal and, after several delays, Singapore’s Court of Appeal on Tuesday heard the challenge.

His lawyer Violet Netto urged the judges to show “mercy” by allowing Nagaenthran to undergo an independent psychiatric assessment.

She asked that the defence team be given “adequate time” to locate psychiatrists for the examination, adding it was against international law to execute mentally disabled people.

But prosecutor Wong Woon Kwong opposed the move and said the defence was seeking to delay proceedings, accusing them of “abusing the process of this court”.

Tuesday’s proceedings ended without a verdict being issued, and a ruling will be handed down at a later date, which is still to be decided.

Nagaenthran was in court for the hearing, which took place with social distancing measures in place to cut the risk of coronavirus infections, and with heavy security.

The appeal was supposed to take place months ago but was delayed after Nagaenthran contracted Covid-19.

Campaigners fear chances of success are slim. If Nagaenthran is hanged, it would be the first execution in Singapore since 2019.

Concerns are also growing that his hanging will be the first in a series in the coming months, with activists warning that authorities are gearing up to execute three other drug traffickers.

Ahead of Tuesday’s hearing, Nagaenthran’s sister Sarmila Dharmalingam told AFP the family was “stressed and frightened thinking of my brother’s current situation”.

Speaking from the family home in Malaysia, she urged the Singapore government to “spare him from the gallows, give him a second chance”.

Rights groups have been ratcheting up pressure, with Amnesty International urging Singapore to spare Nagaenthran and “prevent a travesty of justice”.

“Executing someone whose mental disabilities may impede an effective defence runs counter to international law, and so does the use of this punishment for drug-related offences and its mandatory imposition,” the group said.

Nagaenthran was arrested at the age of 21 after a bundle of heroin weighing around 43 grams (one and a half ounces) — equivalent to about three tablespoons — was found strapped to his thigh as he sought to enter Singapore.

Supporters say he has an IQ of 69 — a level recognised as a disability — and was coerced into committing the crime.

But authorities have defended the decision to press ahead with the hanging, saying that legal rulings had found he “knew what he was doing” at the time of the offence.

The city-state maintains the death penalty for several offences, including drug trafficking and murder, and insists it has helped to keep Singapore one of Asia’s safest places.