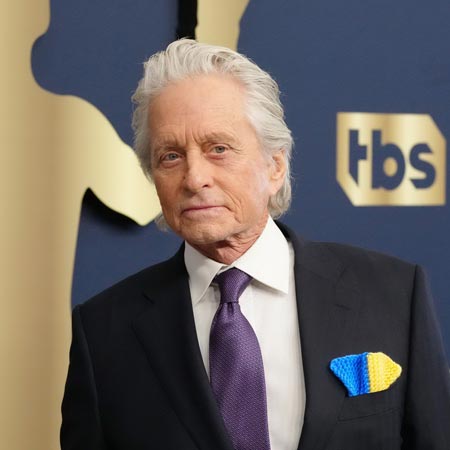 Fashion has always been used as an essential tool to make strong political statements, laced with subtlety and power. That’s exactly what we witnessed at the 28th edition of the Screen Actors Guild (SAG) Awards on Sunday night, wherein a host of celebrities lent their support to Ukraine amid the ongoing Russian invasion of the East European country. Stars like Tyler Perry, Michael Douglas and Jon Bernthal among others expressed their solidarity with Ukraine with their accessories, using the red carpet as a stage to amplify their voices. American actor and producer Michael Douglas, who has been awarded numerous prestigious awards in the past, opted for a blue and yellow pocket square, representing the colours of the Ukrainian flag, on the red carpet. “This is an acknowledgement of what’s going on in Ukraine. It’s just an extraordinary democracy and if ever there’s a reason to realise that the separation between democracy and autocracy or dictatorship, is now, we have seemed to forgotten that, hopefully, this is a reminder of how valuable that is,” he told Extra, talking about his gesture.