Suhana is a vision in white lehnga by Manish Malhotra 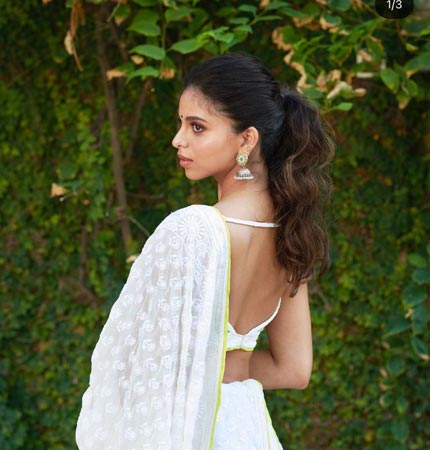 Bollywood superstar Shah Rukh Khan’s daughter Suhana Khan, who is all set to mark her acting debut in Netflix film, is a popular celebrity on social media.

Suhana has once again stole hearts of her fans with her gorgeous ethnic look for celebrity designer Manish Malhotra’s latest collection. In the latest pictures, shared by the designer, the aspiring actor can be seen striking poses in a white chikankari lehenga.

She kept the styling simple and beautiful with minimal makeup and accessorized her ethnic ensemble with just a pair of jhumkis. Her hair was tied in a ponytail and she finished the look with a black bindi.

The photo received much love from close friends and fans.

Malhotra simply captioned his post with her name along with fire and heart icons.

Suhana is expected to make her Bollywood debut with Zoya Akhtar’s Archie adaptation. She has returned to India after finishing her graduation in New York.