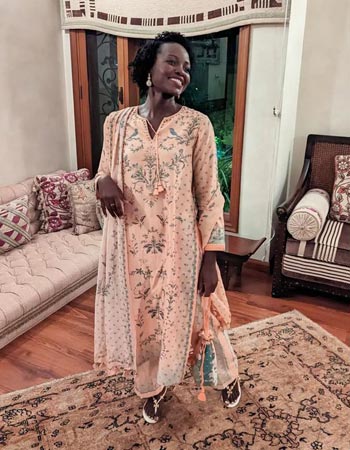 Lupita Nyong’o just dropped photos from her visit to Karachi and they are more than we could ask for. Lupita, best known for her acclaimed performances in Brad Pitt’s production 12 Years A Slave and Black Panther, set off speculation last week after several Twitter accounts claimed she was in Karachi. These posts were followed by photos of Lupita in a lehnga choli. Lupita was in Karachi to attend the wedding of her friend Misha Japanwala, who is known for designing gold breastplates for Cardi B. But neither Lupita nor Misha shared any post that confirmed that the Hollywood actor was in Karachi. Lupita has, however, dropped photos from her trip around the city and they confirm that she was not only in Karachi but also went all desi in the City of Lights. “Loving that shalwar kameez life,” she wrote.