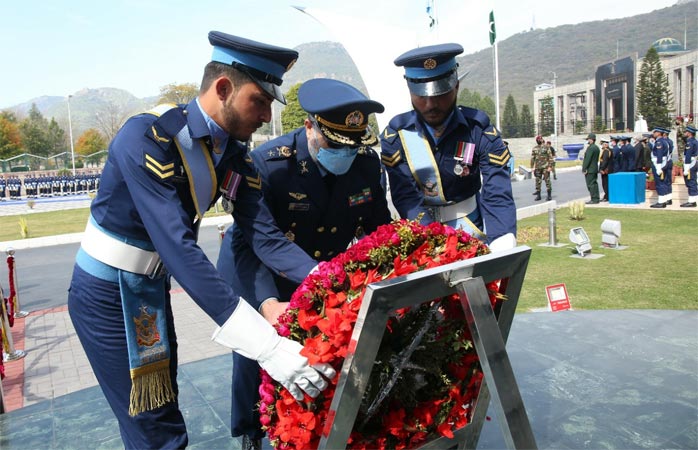 Earlier on his arrival at the Air Headquarters, a smartly turned-out contingent of the PAF presented the guard of honour to the Iranian Commander. Brigadier General Hamid Vahedi also laid a wreath at the Martyrs’ Monument to pay homage to the PAF’s martyrs, , according to a PAF news release..

During the meeting, both the dignitaries discussed matters of professional and mutual interest. Speaking on the occasion, the Air Chief said, “Pakistan and Islamic Republic of Iran enjoy longstanding religious, cultural and historical bonds, which are manifested through strong ties between both air forces.”

He reiterated his resolve to further enhance the existing bilateral cooperation between the two brotherly countries. Meanwhile, the PAF on Monday marked the creation of Number 28 Multirole Squadron, equipped with the latest JF-17 Thunder fighter jets, to make the country’s defence stronger.

The PAF, in a series of tweets posted on its official Twitter handle, said, “Today (Feb 28) marks the date when elite ‘No 28 Multirole Squadron’ of Pakistan Air Force, equipped with Pakistan’s Pride JF-17 Thunder, was raised at PAF Base Samungli. The squadron was raised on 28 Feb, 2018 to strengthen Pakistan’s security along its western borders.”

It further said the Number 28 Squadron was named “Phoenix”, which symbolised “Rebirth” as well as “Fire and Passion”.

The motto of PAF No 28 Squadron is “Khudi Ko Jis Nay Falak Say Buland Ter Dekha”, based on Iqbal’s concept of self-reliance and integrity that is far higher than the skies. The JF-17 fighter jets were equipped with modern avionics and armed with lethal weapons, including long range BVRs (Beyond Visual Range missiles) capable of taking down enemy aircraft and drones from a stand-off distance, it added.

Furthermore, the PAF said, the JF-17 Thunder from the newly raised No. 28 Squadron “Phoenix” also had the honour to participate in the Anatolian Eagle 2019, a Turkish-led multi-national exercise.

“The PAF commends the air and ground crew of 28 Multirole Squadron, that is highly motivated and professional in all the operational and non-operational matters and perform all its roles with honour and utmost safety,” it concluded.