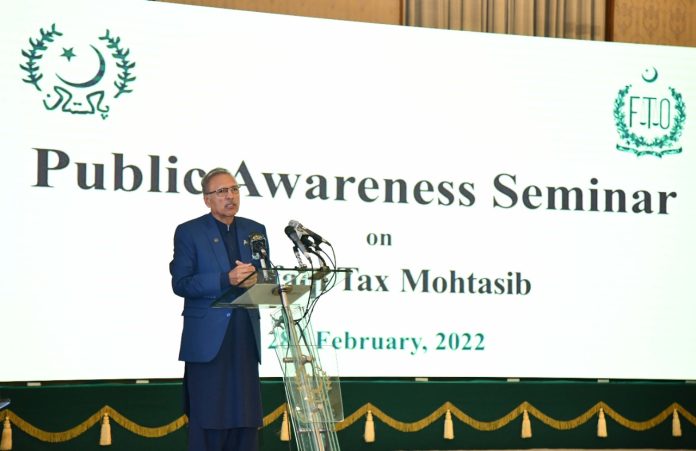 ISLAMABAD: President Dr Arif Alvi Monday said that digitalization was inevitable to address the issues of corruption, delays in disposal of cases as well as bring about transparency in the taxation system.

The president, addressing a Public Awareness Seminar on the role of the Federal Tax Ombudsman (FTO), said the usage of blockchain technology would also help stop the practice of record tampering.

Lauding the role of FTO for promoting taxation by bridging the trust deficit between the payers and collector, said the dearth of resources, ignorance of law, and corruption were the factors behind the delay in resolution of public issues.

He said the early adoption of technology was inevitable as in some cases, the delays are intentionally made to mint money and exemplified the impediments in the procedures of customs clearance of products exported by the business community.

Earlier, the president also launched the FTO’s mobile APP, fast code and FTO portal for registration and tracking of the complaints digitally. He also distributed commendation certificates among the best-performing officers of the FTO.

Calling for the reduction of human factors, the president mentioned the introduction of information technology in the Auditor General of Pakistan’s office making it mandatory for the auditors to frame the charge sheet within a day, to minimize the chances of corruption.

Highlighting the importance of technology, the president also cited the functioning of various Chinese banks which operate without any office and interact with their clients virtually.

He also asked the FTO to enhance its outreach to make the maximum number of taxpayers know the role of the organization who should consider it their own desk.

He said through various measures, the FTO was also bringing about the ease of doing business and also advised the business community to seek a reduction in taxes instead of avoiding documentation of the economy.

President Alvi also appreciated the relief worth Rs 8.5 billion to taxpayers within a year and advised the FTO officers to equip themselves with the knowledge of law to make accelerate the resolution of taxpayers’ issues.

He said if the nation shows its commitment to “Say no to corruption”, no force in the world would be able to deter it from progress.