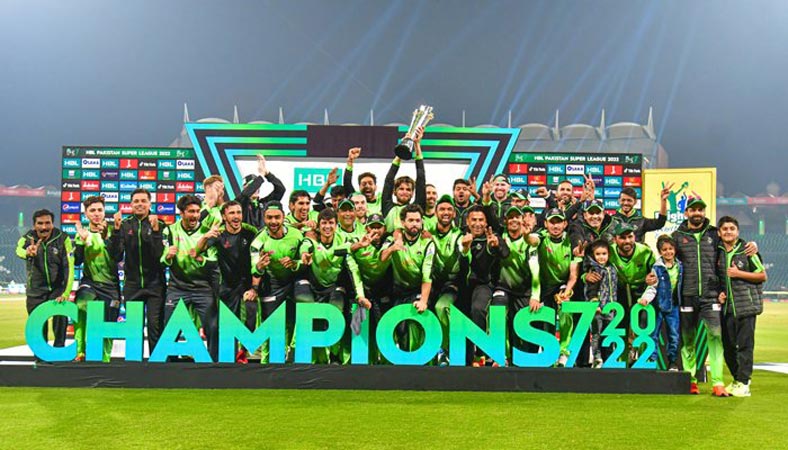 LAHORE: Clinical Lahore Qalandars defeated Multan Sultans by 42 runs to lift their first maiden Pakistan Super League (PSL) title before a full house at Gaddafi Stadium here on Sunday night. Once the league’s eternal wooden-spoon ––– finishing last in the first four editions before reaching the final in 2020 –– Lahore finally completed the set of winners. All six teams have now won the league. Islamabad United won in 2016 and 2018, Peshawar Zalmi in 2017, Quetta Gladiators in 2019, Karachi Kings in 2020 and Multan in 2021. Chasing a formidable victory target of 181, Multan, the most successful team of the seventh edition, could muster only 138 and were all out in 19.3 overs. Led by Mohammad Rizwan, Multan got off to a poor start in chase as their top order was demolished early on and failed to deliver. Rizwan was dismissed for 14, Shan Masood 19, and Aamer Azmat 6. From 63-5, Tim David (27) and Khushdil Shah (32) gave the defending champions some hope but the Lahore’s bowlers were impressive with Shaheen Shah Afridi picking three wickets, Mohammad Hafeez and Zaman Khan claiming two each while Haris Rauf and David Wiese taking one apiece. With the victory, Shaheen not only became the youngest captain to lead a PSL franchise to victory, but also emerged as the leading wicket-taker — claiming 20 scalps. The winners received the glittering trophy along with prize money of $500,000 while Multan received the runners-up purse of $200,00. Islamabad and Peshawar were the two other teams to qualify for the play-offs while Karachi and Quetta bowed out in first round.

Earlier, Lahore got off to the worst possible start as they were reduced to 25-3 in 4.2 overs. In-form Fakhar Zaman was removed for just three runs by Asif Afridi with Shahnawaz Dahani taking a great catch, while Abdullah Shafique was also removed by Asif. After that, veteran Hafeez showed his experience and class as he steered the Lahore’s ship by playing sensibly. Hafeez struck nine boundaries and a six during his dazzling knock, lifting Lahore during a fourth-wicket stand of 54 with Kamran Ghulam (15) and another 58 for the next with Harry Brook who made a fiery 22-ball 41 not out. 41-year-old Hafeez scored a fighting 46-ball 69 to guide Lahore to 180 for the loss of five wickets after they won the toss and batted before a packed stadium. After Hafeez dismissal, Brook and Wiese registered a 43-run stand in just 2.4 overs as they went rampant against the Multan bowlers. Wiese remained not out for 28 runs off just eight balls with three sixes. For Multan, Asif was the stand out bowler with brilliant figures of 3-19, while leggie Imran Tahir gave away just 22 runs in a wicket-less four-over spell. Dahani ended with figures of 1-34 in three overs. Rumman Raees conceded 35 runs in just two overs.

It is pertinent to mention here that Prime Minister Imran Khan had predicted that Lahore might win the seventh edition. Ahead of the tournament, Imran had met Lahore’s team officials including skipper Shaheen. The meeting had come a few days after Lahore had announced that Shaheen would lead their side. As soon as the announcement was made, many had questioned whether Lahore had made the right call by appointing Shaheen as their captain. However, PM Imran had lauded the team for giving Shaheen the key responsibility and predicted that the 21-year-old may guide his team to victory in the mega tournament. The PM had said that choosing a young team captain was a good decision for the franchise. “Youth always change results, and the Lahore Qalandars could win the PSL trophy this time,” the Prime Minister had said.