* 'Miley and Maxx had a great time together and walked around the resort holding hands and kissing,' the source said 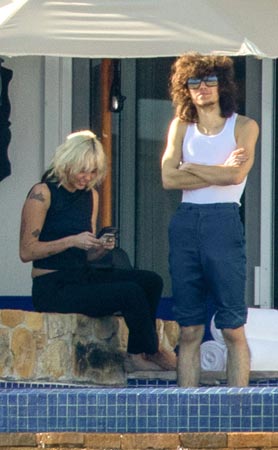 Miley Cyrus took the party out of the U.S.A. this week-the pop star went on a romantic vacay with her new boyfriend, Maxx Morando, in Cabo San Lucas, Mexico.

The pop star and drummer for alternative rock band Liily arrived on a private jet earlier this week, a local source told E! News. On Friday, Feb. 25, the lovebirds were photographed showing sweet PDA and basking in the sun at their beachside resort.

“Miley and Maxx had a great time together and walked around the resort holding hands and kissing,” the source said. “They cuddled up to one another wherever they went. They had lunch at the poolside restaurant and sat on the same side of the table whispering to each other and laughing.”

Miley, 29, and Maxx, 23, also enjoyed a private dinner on the beach, the insider continued, adding that “they seemed very happy being together and relaxing on vacation.”

Miley and Maxx first sparked romance rumors in November, when they were spotted looking cozy at Gucci’s Love Parade runway show on the Hollywood Walk of Fame. In December, he joined her and Pete Davidson backstage as they rehearsed for NBC’s Miley’s New Year’s Eve Party in Miami.

In January, a different source confirmed exclusively to E! News in January that Miley was “happily dating” Maxx and that “it’s official between them.” An additional insider said at the time, “They are both artistic and creative, so they bond over being musicians.”