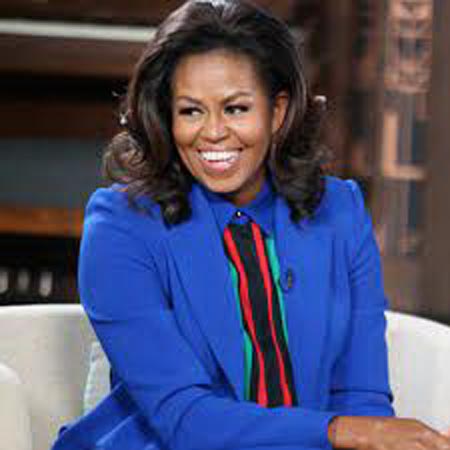 Need some inspiration? Just turn to Michelle Obama. For years, she’s motivated people through her words of wisdom and commitment to change, championing causes close to her heart like supporting military families, teaching children how to live healthier lives and promoting education. There’s also her impressive résumé, which includes her time as a lawyer, public service leader, best-selling author and first lady of the United States. And, more recently, she’s added production company founder to the list along with her husband and former president Barack Obama. Through it all, the 58-year-old has been candid about the challenges she’s faced-and overcome. “Success isn’t about how your life looks to others. It’s about how it feels to you,” Obama told graduates during her 2012 commencement speech at Oregon State University. “We realized that being successful isn’t about being impressive, it’s about being inspired. That’s what it means to be true to yourself.”

And while it’s impossible to list them all, here are just some of her most inspirational quotes. “Do not be afraid to fail because that often times is the thing that keeps us as women and girls back,” Michelle Obama said while speaking with students on International Day of the Girl in 2016. “Because we think we have to be right. We think we have to be perfect. We think that we can’t stumble. And the only way you succeed in life, the only way you learn, is by failing. It’s not the failure; it’s what you do after you fail.” Asked by Meghan Markle the advice she gives daughters Malia Obama and Sasha Obama, the former first lady explained, “Don’t just check the boxes you think you’re supposed to check…I tell them that I hope they’ll keep trying on new experiences until they find what feels right.” “And what felt right yesterday might not necessarily feel right today,” she continued in their conversation for British Vogue. “That’s OK-it’s good, even. When I was in college, I thought I wanted to be a lawyer because it sounded like a job for good, respectable people. It took me a few years to listen to my intuition and find a path that fit better for who I was, inside and out.”

Job titles shouldn’t matter. “What I learned was none of that has to do necessarily with who I am,” Obama said in a 2018 panel with Penguins Books UK., “not what I want to be.”

Instead, Obama encourages you to think big: What do you care about, how do you want to invest your time, what brings your joy and what makes your sad??”We don’t teach that in school,” she continued, “but I learned to try and find that for me and turn that passion into my career.” ?Once she did that, her life changed for the best. Why? “Because I started asking myself that one simple question: Not what did I want to be, but who did I want to be?” she said, later adding,”If you’re starting to think, what kind of work will bring you joy? Because if you find that, you’re going to do well at it and everything else will fall into place. And it did for me.”

“Barack and I were raised with so many of the same values: like, you work hard for what you want in life; that your word is your bond; that you do what you say you’re going to do; that you treat people with dignity and respect, even if you don’t know them and even if you don’t agree with them,” she said at the 2008 Democratic National Convention. “And Barack and I set out to build lives guided by these values and to pass them on to the next generation. Because we want our children-and all children in this nation-to know that the only limit to the height of your achievements is the reach of your dreams and your willingness to work hard for them.”

In her 2018 memoir Becoming, Obama wrote about a call-and-response she’d learned in high school. “Confidence, I’d learned then, sometimes needs to be called from within,” she noted. “I’ve repeated the same words to myself many times now, through many climbs: ‘Am I good enough? Yes I am.'”

“When someone is cruel or acts like a bully, you don’t stoop to their level,” Obama said during her speech at the 2016 Democratic National Convention. “No, our motto is when they go low, we go high.”

While giving her 2015 Tuskegee University commencement address, she said, “I have learned that as long as I hold fast to my beliefs and values-and follow my own moral compass-then the only expectations I need to live up to are my own.” “There’s power in allowing yourself to be known and heard in owning your unique story, in using your authentic voice,” she wrote at the end of Becoming. “And there’s grace in being willing to know and hear others. This, for me, is how we become.”

“One of the lessons that I grew up with was to always stay true to yourself and never let what somebody else says distract you from your goals,” Obama said during a 2008 interview with Marie Claire. “And so when I hear about negative and false attacks, I really don’t invest any energy in them, because I know who I am.”

“You may not always have a comfortable life. And you will not always be able to solve all the world’s problems all at once,” Obama said during her 2011 keynote address at the Young African Women Leaders Forum. “But don’t ever underestimate the impact you can have, because history has shown us that courage can be contagious, and hope can take on a life of its own.”