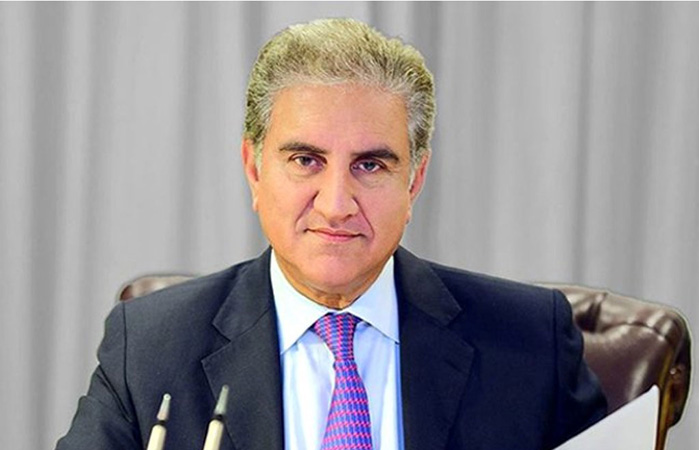 According to the spokesperson, Qureshi informed his Ukrainian counterpart that Prime Minister Imran Khan, during his recent visit to Moscow, “regretted the latest situation between Russia and Ukraine”. He said the Pakistani premier “had hoped diplomacy could avert a military conflict”.

“Conflict was not in anyone’s interest, and the developing countries were always hit the hardest economically, in case of conflict,” said Qureshi.

Islamabad believes that disputes should be resolved through dialogue and diplomacy, he added.

Pakistan’s top diplomat also took up the issue of evacuation of Pakistani community and students in Ukraine and their safe return to their home. He appreciated the Ukrainian authorities’ role in the “evacuation process and asked for continued facilitation and smooth border crossing at the earliest possible”.

Russia launched its invasion by land, air and sea on Thursday following a declaration of war by President Vladimir Putin. An estimated 100,000 people fled as explosions and gunfire rocked major cities. Dozens have been reported killed.

The United States and Ukrainian officials say Russia aims to capture Kyiv and topple the government, which Putin regards as a puppet of the US.

Russian troops seized the Chernobyl former nuclear power plant north of Kyiv as they advanced along the shortest route to Kyiv from Belarus to the north.

On the fourth day of the biggest assault on a European state since World War Two, the Ukrainian president’s office said negotiations between Kyiv and Moscow would be held at the Belarusian-Ukrainian border. They would meet without preconditions, it said.

Kyiv is still in Ukrainian government hands, with President Volodymyr Zelenskiy rallying his people despite Russian shelling of civilian infrastructure.

Qureshi reiterated the importance Pakistan attached to its good relations and close cooperation with the UK and other European partners. He hoped that the next round of strategic dialogue with the UK will take place in near future.

On the developments in Ukraine, Qureshi reiterated concern over the heightened tensions and military escalation. He stated that Prime Minister Imran Khan, during his recent visit to Moscow, had regretted the latest situation between Russia and Ukraine and said Pakistan had hoped diplomacy could avert a military conflict.

Qureshi had further underscored that a conflict was not in anyone’s interest and that the developing countries were always hit the hardest economically in case of conflict. he emphasized that diplomacy and a peaceful solution were indispensable. In this regard, he stressed sustained engagement through diplomacy and dialogue.

On Pakistan-UK ties, the two sides reiterated their resolve to celebrate the 75th anniversary of the establishment of diplomatic relations this year.

Lord Ahmad thanked the foreign minister for the detailed exchange and expressed hope that the UK and Pakistan will keep on working together on issues of common interest.