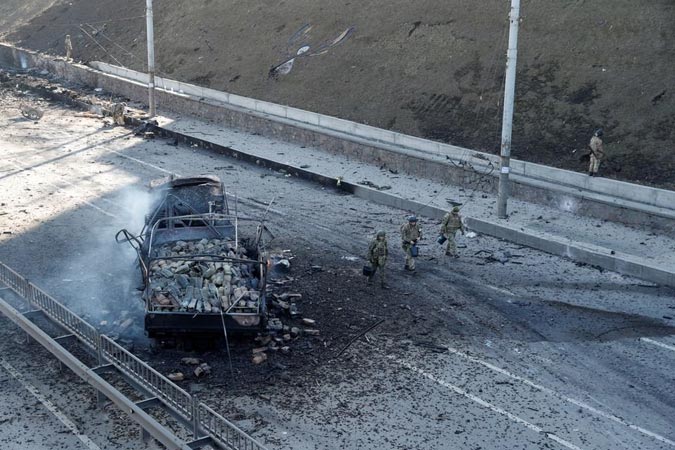 Ukraine said Sunday it had agreed to talks with Russia after four days of conflict, as Russian President Vladimir Putin ordered his defence chiefs to put nuclear “deterrence forces” on alert.

The conflict has already killed dozens of civilians, forced hundreds of thousands to flee and turned Moscow into a global pariah.

President Volodymyr Zelensky’s office said a Ukrainian delegation would meet the Russian one at the border with Belarus, which has allowed Russian troops passage to attack Ukraine.

The meeting is set to take place near Chernobyl — the site of the world’s worst nuclear disaster.

“The politicians agreed that the Ukrainian delegation would meet the Russian one without preconditions,” Zelensky’s office said in a statement after the president spoke to his Belarusian counterpart Alexander Lukashenko.

Ukrainian forces earlier said they had fought off a Russian incursion into Ukraine’s second biggest city, Kharkiv, on day four of Russia’s invasion.

As Western countries lined up to send arms into Ukraine and impose ever more stringent sanctions, Putin ordered his defence chiefs to put the country’s nuclear “deterrence forces” on high alert.

Ukraine has reported 198 civilian deaths, including three children, since the invasion began.

The UN has put the civilian toll at 64.

“The past night in Ukraine was brutal,” Zelensky said.

Several European countries meanwhile banned Russian airlines from their airspace on Sunday and many pledged arms for Ukraine but made it clear that they will not intervene militarily.

In his traditional Sunday message to the faithful in St Peter’s Square, Pope Francis called for weapons to “fall silent” in the country and for the opening of humanitarian corridors.

A day after Berlin said it would send anti-tank weapons and Stinger missiles to Ukraine, German Chancellor Olaf Scholz said the world was in a “new era” and warned of further sanctions.