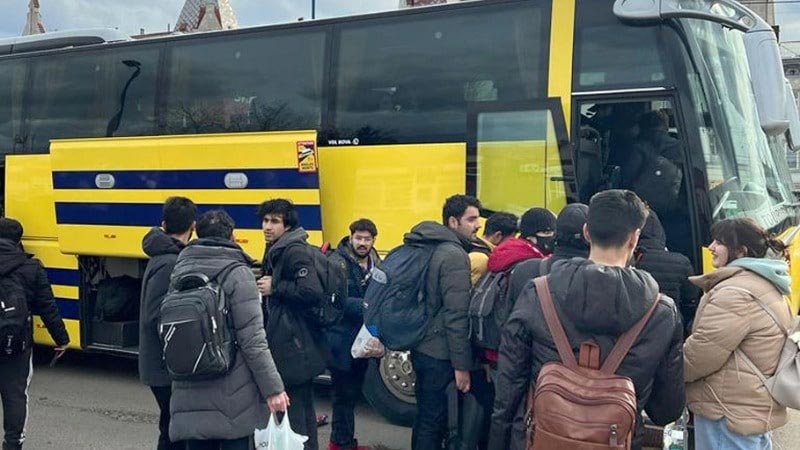 Pakistanis who were evacuated from Ukraine and transported to Poland have received a stern warning from the embassy after 15 were arrested Saturday from the Poland-Germany border trying to escape to Germany.

The Pakistani embassy in Ukraine has warned the citizens to refrain from “any such adventure” or else, the evacuation will be stopped.

Pakistanis – most of them students – stranded in various Ukrainian cities are being moved to Poland. They will be issued 15-day Polish visas on humanitarian grounds. During this time, they will not be allowed to leave Poland for any other country and must return to Pakistan before their visa expires.

The embassy has said that anyone trying to sneak into any other country will be responsible for its consequences.

So far, 35 Pakistanis have been evacuated to Poland.

The embassy is moving the remaining citizens to Ukraine’s city of Lviv. They are being gathered at a railway station from where they are taken to a nearby border crossing to enter Poland.

Lviv is 73 kilometers away from the border.

However, the evacuation efforts have been slowed down due to the rush at border crossings as a massive number of people are attempting to leave Ukraine.

There are immense difficulties at border crossing points due to huge number wanting to leave Ukraine. Embassy and Ministry is actively engaging Govt of Ukraine to expedite the process. In an update Saturday afternoon, the Pakistan embassy said that a total of 7,000 Pakistanis were living in Ukraine, including 3,000 students. Most of them had already left the country before the Russian attack, but 600 students remain in Ukraine. More than 170 Pakistanis have been evacuated from Kharkiv, according to the latest updates posted by the embassy. They will be received at the Lviv railway station. Meanwhile, the embassy has asked the citizens to stay in touch with their focal persons “for smooth evacuation as soon as possible.”