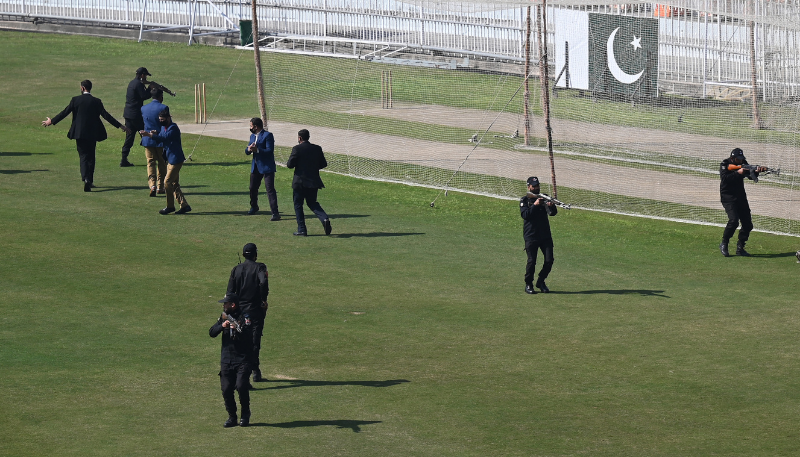 Islamabad: Australia flew into Pakistan Sunday for their first cricket tour in nearly a quarter of a century — and into a high-security bubble that will envelop them throughout their six-week stay. Senior batsman Steve Smith posted a picture on Twitter of the 35-strong Australia tour party inside their charter flight’s cabin after it touched down in the Pakistan capital, Islamabad. They last played in Pakistan in 1998, winning the three-Test series 1-0 and blanking the hosts in the three one-day internationals.

Having been forced to play their home games abroad — mostly in the United Arab Emirates — Pakistan appeared to have reassured international cricket authorities last year with both New Zealand and England scheduled to tour.

But the Black Caps hastily departed in September just minutes before their first match was due to start, citing security fears, and England postponed tours by both their men’s and women’s teams soon after. The decisions incensed Pakistan cricket authorities, who felt they had done everything possible to ensure safety and security.

They say they are again leaving nothing to chance, with nearly 4,000 police and military personnel guarding the team hotel in Islamabad and the cricket stadium in the nearby garrison city of Rawalpindi.

Australia captain Pat Cummins said he was reassured by the high-level security, the sort normally reserved for visiting heads of state.

“It’s comforting,” said Cummins after being whisked to the team’s Islamabad hotel in a heavily-guarded convoy. “We are really lucky to be surrounded by so many professionals.

“Absolutely feel incredibly safe. Lots of security, straight off the plane and straight to the hotel.”