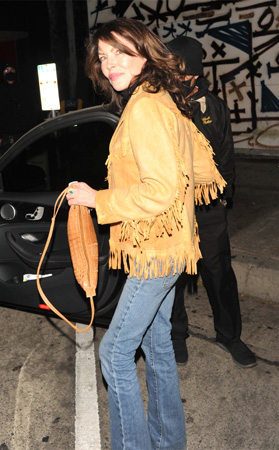 Wondering what Lara Flynn Boyle has been up to these days? Well, on Feb. 23, the 51-year-old actress was spotted at the star-studded restaurant Craig’s in West Hollywood, Calif., rocking a fringe jacket, black turtleneck and pair of blue jeans.

The public sighting marked a rare one for Boyle. While she was last snapped by the paparazzi in November, she hasn’t been photographed on a red carpet since 2017, when she attended AMT’s D.R.E.A.M. gala in Beverly Hills.

It’s also been a minute since fans have seen her on their screens. While Boyle starred in popular TV shows and movies in the ’90s and early aughts, she seemed to take a break from the spotlight following her 2015 film Lucky Dog. It was another five years before she appeared in the 2020 film and her most recently released project Death in Texas.

So where has she been? From her perspective, which she shared with The Hollywood Reporter in an interview last June, she “never went anywhere.” Although, she admitted to being off the digital grid, telling the outlet she didn’t have a computer or social media accounts.

And a smartphone? Forget about it. “I still have an old phone, not the ones that can look up where you are or where you’re going,” she added. “No thank you!”

Still, try as she might, Boyle can’t seem to avoid the paparazzi and tabloids. When interviewer Chris Gardner asked if she pays attention to any of the “negative publicity,” Boyle replied, “Sometimes, yeah. They’re like mosquitoes. The minute you leave your house, it’s like mosquitoes. They’re like, ‘Boyle has left the side entrance. Boyle is now going out the main gate.’ But I chose this profession. I would be a total jerk if I complained about it. If I’m going to take the paycheck, I’m also going to take the bad publicity. It’s going to happen.”

And she doesn’t let it get her down. “Well, it’s not always a pony in a parade but I chose my career,” she told THR when asked about Hollywood and roles being presented to her today. “I chose the highs, and I chose the lows. This career I have chosen has been kinder to me than it hasn’t. If I can’t roll with the bumps, then I have no business riding the roller coaster. Of course, I’m a human being and there are going to be questions that come into your head or your heart. I don’t know if this is good or bad, but I have weathered the storm with a lot of negative publicity and at the end of the day, I’ll take the negative publicity and keep on rolling. It’s worth it.”