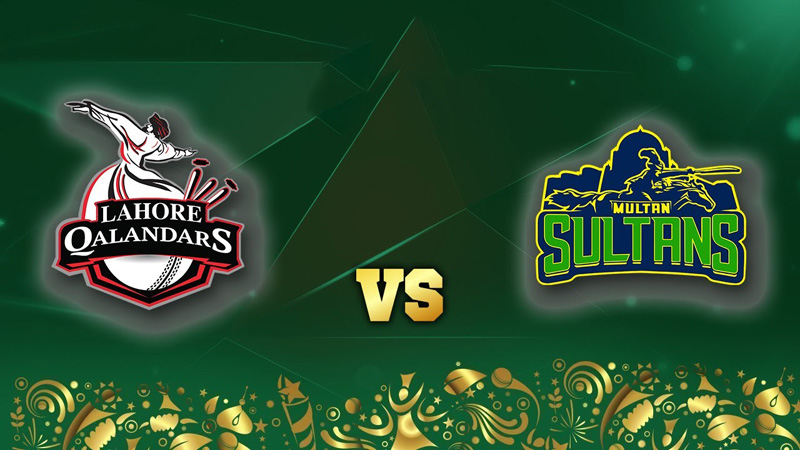 LAHORE: Spirited Lahore Qalandars will be aiming for their maiden coveted trophy when they clash with high-flying Multan Sultans in the high-octane final of the Pakistan Super League VII at picturesque Gaddafi Stadium here on Sunday (today). This will be the second PSL final to be staged in Lahore, the 2017 final was won by Peshawar Zalmi in the first-ever PSL match to be staged in Pakistan.Led by fast bowler Shaheen Shah Afridi, Lahore are the only team in the six-team league who have not won the title since Pakistan’s flagship Twenty20 League started in 2016.Lahore have qualified for the PSL final for the second time:in 2020 they lost to Karachi Kings in the final. Lahore will be facing tough opponents in rampaging Multan who won nine of their ten first round matches.It is interesting to note that Lahore were the only side to beat them in the first round but defending champions Multan roared back to avenge that defeat by beating them by 28 runs in the qualifier on Wednesday.Lahore have won seven out of 12 matches in this year’s edition.Both the teams are power-packed in batting as well as in bowling and boast of some very fine performers who can turn the tables on their day. The captains of both teams want their sides to enjoy the momentous occasion on Sunday and play fearless cricket, a formula that has done wonders for both in the PSL 7. Aleem Dar and Richard Illingworth of the ICC elite panel of umpires have been named as on-field umpires for the final.Aleem and Illingworth have collectively umpired in 81 T20 Internationals. While this will be Illingworth’s maiden PSL final, Aleem, who is the most capped T20I umpire with 60 appearances, has previously umpired in the finals of the 2016, 2018, 2020 and 2021 editions.Michael Gough, also from the elite panel, will be the third umpire, while Ahsan Raza from the ICC’s international panel will be the fourth umpire.Roshan Mahanama, ICC’s former match referee, will lead the playing control team.

Shaheen, whose side edged out Islamabad United by six runs in a last-over thriller in the second eliminator on Friday, has vowed his team will not settle for anything less than winning the trophy. Lahore’s thrilling victory against Islamabad undoubtedly has warmed the hearts of their huge Lahore fan base. “After Friday night’s incredible win we want to settle for nothing but the PSL trophy,” said Shaheen. Lahore opener Fakhar Zaman is 15 runs away from becoming the first batter to post 600 runs in a PSL season. The left-hander has so far tallied 585 runs (12 innings) at 48.75 and a strike-rate of 154.35. His tally includes one century and seven half-centuries. Lahore’s second-best run-getter is Kamran Ghulam. His 284 runs places him at No.9 on the leading run-getters list.Shaheen has led Lahore from the front. The ICC Men’s Cricketer of 2021 has continued his rich vein of bowling form with 17 wickets (21.41 average, 7.58 economy), which has put him at number-two on the bowling charts behind Islamabad United captain Shadab Khan. Lahore’s emerging pick Zaman Khan has been one of the finds of the tournament, the right-arm fast has collected 16 wickets at 22.56.Lahore tried to bring in their ace Afghan spinner Rashid Khan from Bangladesh in a chartered flight to play on Sunday, but Rashid turned down the audacious bid in the middle of Afghanistan’s white-ball tour of Bangladesh. Rashid, however, tweeted that it wouldn’t be possible for him to play the PSL final “due to national duty which is always a first priority.”The fact that Lahore even thought about this idea is an illustration of Rashid’s value. He was an essential part of their early league-stage run, forming part of the most lethal attack in the league. When he signed off and left on February 20, he’d taken 13 wickets in nine matches at an average of 17.30, while maintaining an economy rate of 6.25.

Multan are led inspirationally by Mohammad Rizwan, declared Twenty20 international player of the 2021 by the International Cricket Council last month.Rizwan has scored 532 runs at a brilliant average of 76. The right-hander’s strike-rate is 126.96 and his runs tally includes seven fifties.Shan Masood, the Multan opener, is third on the run-getters list with 459 runs from 11 innings. Multan’s all-rounder Khushdil Shah has remained the surprise package with the ball in the tournament. The left-arm-spinner has time and again taken crucial wickets for his side and has collected 16 wickets at 12.31 and an economy rate of 6.71. Imran Tahir and ShahnawazDahani have also taken 16 wickets each at 17.25 and 18.87 respectively.Multan also have power hitters in Western Australian Tim David and former South African RileeRossouw.Rizwan hopes his team can repeat their last year’s triumph in the final held in Abu Dhabi. “It has been an amazing tournament for us and I, as captain, could not have asked more from my players,” said Rizwan on Saturday.”Lahore have played good cricket throughout the PSL 7 and I am sure they will have great support on Sunday. The Lahore crowd has been amazing and I am sure we will also have our supporters at the venue. Last year we won in front of an empty stadium in Abu Dhabi due to covid restrictions so the opportunity of lifting the trophy in front of a packed Gaddafi Stadium by the grace of Almighty Allah is amazing and our entire squad is fully motivated to deliver,”he added.