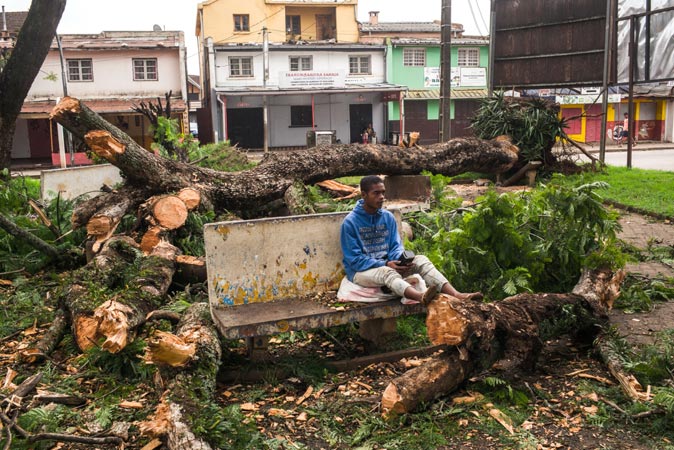 Cyclone Batsirai weakened overnight but not before wreaking havoc in the poor Indian Ocean island nation which is still reeling from a deadly tropical storm earlier this year. The eastern district of Mananjary was lashed with heavy rains and wind before the cyclone made landfall, uprooting trees, destroying buildings and forcing residents to weigh down flimsy corrugated iron roofs, an AFP correspondent saw.

The rain will cause flooding across parts of the country, Madagascar’s meteorological office said on Sunday.

Batsirai made landfall in Mananjary on Saturday night as an “intense tropical cyclone”, packing winds of 165 kilometres per hour (102 miles per hour), Faly Aritiana Fabien of the country’s disaster management agency told AFP.

His colleague responsible for risk management in the same agency, Paolo Emilio Raholinarivo, listed the numbers of dead and their location in a text message to AFP, but gave no further details.

However the national meteorological office — which had warned of “significant and widespread damage” — said on Sunday that Batsirai, Shona word for help others, “has weakened”.

The cyclone’s average wind speed had almost halved to 80 kilometres per hour (50 miles per hour), while the strongest gusts had fallen back to 110 km/h from the 235 km/h recorded when it made landfall, Meteo Madagascar said. At a cemetery in the eastern town of Mahanoro, overlooking the sea, Marie Viviane Rasoanandrasana, sat on the ground watching over the bodies of her husband, her father-in-law and her daughter.

The waves of the rising sea eroded the sandy hill which was part of a graveyard. Several graves were ripped open and some bodies, including those of her family, were exposed. “A few days ago the sea was far away, but this morning I was told the waves had washed away part of the cemetery,” the widow, 54, said.

“We are sad,” she said. “We’ve already had damages at home because of the cyclone. Now this! “Daily life is already very hard,” she said, adding the family would be forced to rebury the remains in a temporary grave until they raise enough money for a “proper burial”. “It’s not even a year since I tiled my daughter’s grave,” she said.

In Mananjary, the epicentre of the cyclone when it lashed Madagascar, residents estimated that most of the town was ravaged. “Mananjary is completely destroyed, no matter where you go everything is destroyed,” said one resident named Faby. Another man, Fana, was certain “almost 95 percent of the city has been destroyed. We implore the state to come and help us as soon as possible”.

The Meteo-France weather service had earlier predicted Batsirai would present “a very serious threat” to Madagascar, after passing Mauritius and drenching the French island of La Reunion with torrential rain.

At least 131,000 people were affected by Ana across Madagascar in late January. Close to 60 people were killed, mostly in the capital Antananarivo.

The World Food Programme pointed to estimates from national authorities that around 595,000 people could be directly affected by Batsirai, and 150,000 more might be displaced due to new landslides and flooding. The storm poses a risk to at least 4.4 million people in total, the International Federation of Red Cross and Red Crescent Societies said.

The former French colony off Africa’s southeastern coast is in the midst of a six-month rainy season that often results in casualties and widespread damage.

And in March 2017, at least 78 people perished in Cyclone Enawo.

Global warming has increased the risk of flooding and tropical storms, as the atmosphere retains more water and rainfall patterns are disrupted. Southern parts of Madagascar are reeling from the worst drought in four decades. South Africa’s President Cyril Ramaphosa told a summit of African leaders meeting in Addis Ababa on Sunday that the continent was “experiencing the worst impacts of phenomena associated with global warming such as droughts, floods and cyclones”.

“Despite not being responsible for causing climate change, it is Africans who are bearing both the brunt and the cost,” he said.