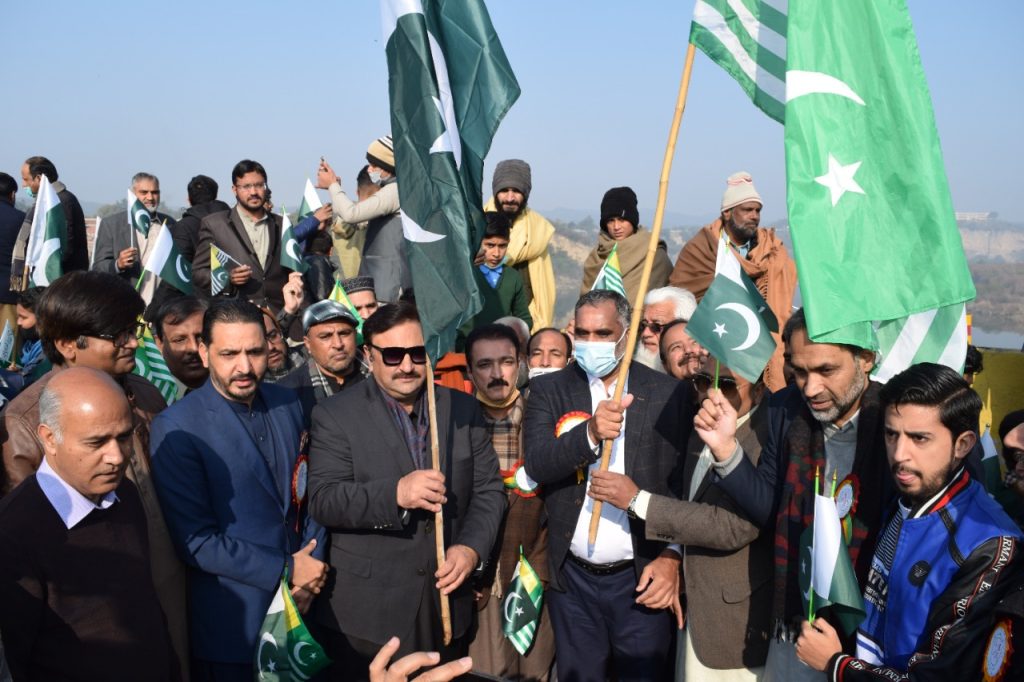 MIRPUR (AJK): Human chains by people of Pakistan and AJK at all seven bridges –the entry/exit points of emerged as a hallmark of the nation-wide Kashmir Solidarity Day observed amidst full-throat slogans of “Kashmir Baney Ga Pakistan” by the people across AJK on Saturday.

The day was observed with unprecedented zeal and fervor to express solidarity with Kashmiri brethren fighting against the tyranny of occupational forces in the Indian Illegally occupied Jammu & Kashmir.

The day was primarily marked with capacious programs including day-long rallies and demonstrations through making human chains joining hands with Pakistani brethren gathered at all the entry points of AJK. 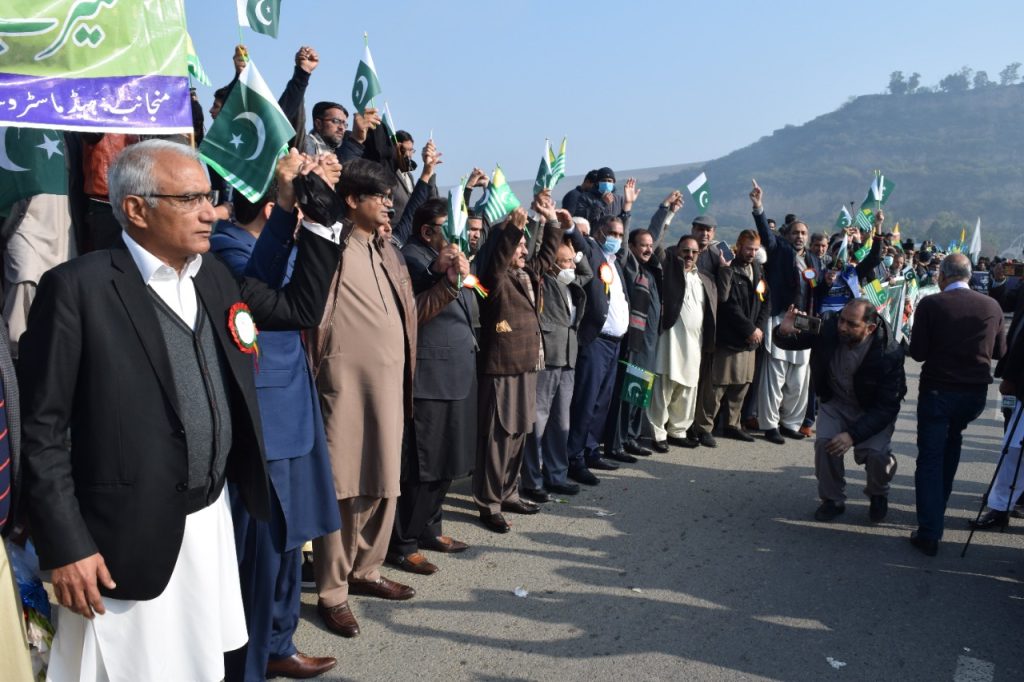 By observing the day, people renewed resolve to continue extending fullest moral, political and diplomatic support, shoulder to shoulder Pakistan to freedom-loving brethren in the Indian Illegally occupied Jammu & Kashmir in their just and principled struggle for the achievement of Kashmiris legitimate right to self-determination and liberation of the motherland from the Indian clutches.

As a public holiday, people representing various walks of life including political, social and human rights organization took out rallies in all big and small cities across AJK including the capital city of Muzaffarabad and at the district and tehsil headquarters of all ten AJK districts including Mirpur, Kotli, Bhimbher, Rawalakot, Bagh, Palandri, Haveili, Hattiyan and Neelam Valley held seminars and vowed to be with their oppressed brethren in their hour of trial.

The day was observed with renewed pledges and commitments to continue diplomatic, moral and political support to Jammu Kashmir people in their just and principled struggle for the achievement of the right to self-determination and the cause of Kashmir.

As a mark of respect to the valiant struggle of Kashmiris in Occupied Jammu & Kashmir, one-minute silence was observed at 9.58 a.m. to pay respects and homage to the martyrs of Kashmir, as all rail and road traffic came to a standstill.

The human chain was formed on all seven bridges, including at Mangla, Kohala, Dhalkot, Azad Pattan, Bhimbher and Holar besides at Bararkot the entry and exit points which connect AJK with Pakistan. Thousands of people belonging to AJK and Pakistan areas and gathered at these bridges and formed a Human Chain to reiterate complete solidarity between them.

The human hands chain formed both by Pakistani and Kashmiri people was aimed at to reiterate the unity and fraternity of this fact that both the people have bonds of love and affection towards each other.
Flowing of rivers towards Pakistan and ways linked with land transpire the natural accession with the country, a center of Kashmiri people hopes and expectations.

In Mirpur district, a large number of people from adjoining Punjab province led reached at Mangla bridge, the gateway to this part of Jammu & Kashmir State, and made human chain to express solidarity with the people of AJK who had also gathered at the bridge to make human chain joining hands with the people of Pakistan to mark the day.

A large number of people belonging to various walks of life including the elders of various segments of the civil society from adjoining Jhelum district reached Mangla bridge, gateway to this part of the Himalayan Jammu Kashmir State, to join the human chain with locals to mark the solidarity on behalf of the people and government of Pakistan with the people of Jammu Kashmir.

While airing their views to media on this occasion mark the Kashmir Solidarity Day key participants called upon the world community to ensure early peaceful solution of Kashmir dispute in accordance with the UN Resolutions and Kashmiri people’s wishes, speakers said that Kashmiris struggle for freedom is in fact the struggle for completion of Pakistan – since Pakistan is incomplete without its jugular vein – Kashmir, they declared.

They said that the hearts of the people of Pakistan and Kashmir beat in unison. Pakistan, he declared, would continue full moral, political and diplomatic support to the people of Jammu & Kashmir in their just and principled struggle for freedom till it reach to its logical end.

Speakers paid glowing tributes to the valiant struggling people for facing large scale Indian atrocities in the held territory. They said the sacrifices being offered by the valiant Kashmiri people would not go waste as the time was not far off when their struggle would be crowned with success very soon.

Speakers called upon the United Nations besides the international powers including the United States of America to exert pressure on India to give a matching response to Pakistan’s persistent offer for early peaceful resolution of Kashmir issue through resumption of composite dialogue process in line with the aspirations of Jammu Kashmir people without further loss of time.

Speakers demanded that India should immediately stop human rights violations in occupied Kashmir and must give the right of freedom to the people of Kashmir according to the UN charter.

A rally organized by the Azad Jammu Kashmir Jamaat-e-Islami was held here at Shaheed Chowk on Saturday which started from Allama Iqbal Road and culminated at Mangla bridge where they joined the human chain to express solidarity to the people of occupied Kashmir.

The participants of the rally demanded of the global forces to pressurize India to give the right of freedom according to the UN charter to the people of Kashmir.

Through various unanimously passed resolutions the mammoth Congregations called for early peaceful settlement of Kashmir problem through the resumption of proposed comprehensive bilateral dialogue between India and Pakistan without further delay to avert the threat of any conflict between the two nuclear neighboring arch-rivals.

In Kotli and Bhimbher districts of Mirpur division: Kashmir Solidarity Day was also observed in Kotli and Bhimbher districts in this division with traditional zeal and fervor. The grand public rallies was taken out in both of the districts to mark the day. Addressing rallies on this occasion, speakers said that Kashmir is the lifeline of Pakistan and Pakistani people fully share the joys and sorrows of their Kashmiri brethren of the Indian held State.

All the three radio stations of Azad Kashmir including Mirpur, Muzaffarabad and Tarakheil and AJK TV aired special programmes and the national and AJK State Press brought out special supplements to highlight the struggle of Kashmiris and to express their solidarity with Kashmir freedom movement.