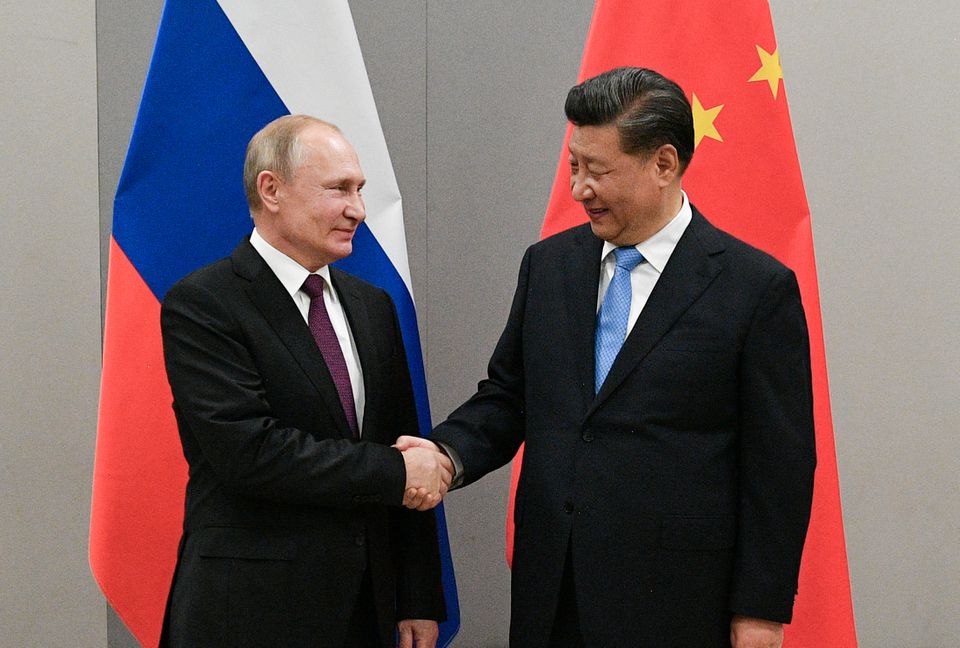 Moscow: Russia won China’s backing in its showdown with the West over Ukraine on Friday, as Beijing agreed with Moscow that the US-led NATO military alliance should not admit new members.

The demand for NATO to stop expanding came after a meeting between Russian President Vladimir Putin and Chinese counterpart Xi Jinping in Beijing that saw Putin hail the two countries’ “dignified relationship”.

In a long strategy document, Moscow and Beijing hit out at what they said was Washington’s destabilizing role in global security.

“The parties oppose the further expansion of NATO and call on the North Atlantic Alliance to abandon the ideological approaches of the Cold War era,” the document read, urging respect for the “sovereignty, security and interests of other countries.”

The call echoes demands from Russia that have been at the centre of weeks of intensive negotiations between Moscow and the West, under the shadow of a potential conflict.

Western capitals have accused Russia of amassing some 100,000 troops on the borders of pro-Western Ukraine in preparation for an invasion and have vowed to impose devastating sanctions on Moscow if it attacks.

The document released by Beijing and Moscow Friday also set out criticisms of Washington’s “negative impact on peace and stability” in the Asia-Pacific region.

Russia and China also said they were “seriously concerned” by the AUKUS defence alliance including Australia, the UK and the United States.

German Chancellor Olaf Scholz was the latest European leader to announce a visit to the region on Friday, saying he would go to Ukraine on February 14 and Russia the next day.

Later Friday, the first US soldiers of the 3,000 announced by President Joe Biden this week arrived in Germany at the Wiesbaden military base.
The US is sending 2,000 troops stationed in the US. They are being flown to Germany and Poland. Another 1,000 already in Germany are being sent to Romania.

– ‘Delusional’ false flag claims –
French President Emmanuel Macron will visit Moscow on Monday and Kyiv on Tuesday for talks with his Russian and Ukrainian counterparts.

Putin’s meeting with Xi — hours ahead of the opening ceremony of the Winter Olympic Games — came after the United States said it had evidence of a plan by Moscow to film a fake Ukrainian attack on Russians to justify an attack on its neighbour.

Pentagon spokesperson John Kirby said the US had “information that the Russians are likely to want to fabricate a pretext for an invasion”, but did not provide evidence.

Russia, which has repeatedly denied any invasion plans, said the US claims were absurd.

“The delusional nature of such fabrications — and there are more and more of them every day — is obvious,” Foreign Minister Sergei Lavrov said.
Washington’s claim came on the back of visits from European leaders to shore up their backing for Kyiv, including from British Prime Minister Boris Johnson and Turkish President Recep Tayyip Erdogan.

Ukraine’s Foreign Minister Dmytro Kuleba on Friday welcomed the displays of support, saying they had prevented Russia from “further aggravating the security situation”.