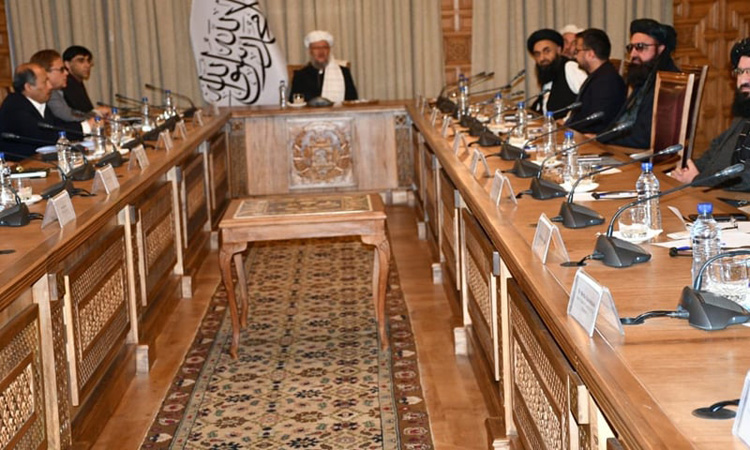 A Pakistani delegation led by National Security Adviser Moeed Yusuf visited Kabul on Saturday to hold discussion with the government of Afghanistan on matters of mutual interest.

The Ambassador of Pakistan to Afghanistan Mansoor Ahmad Khan tweeted that the NSA had “a productive meeting with Afghanistan’s Minister of Foreign Affairs Mullah Amir Khan Muttaqi to kick off the visit”.

A statement issued by the presidential palace in Kabul quoted Hanafi as saying: “The policy of the Islamic Emirate [of Afghanistan] is clear that that we will not allow anyone to use Afghan soil against [our] neighbours and other countries. We also want similar action from others.”

The assurance from the Taliban government in Kabul comes amid a spike in attacks by the banned Tehreek-i-Taliban Pakistan – whose leadership is said to be headquartered in Afghanistan – in Pakistan after the group declined last month to extend a ceasefire with Islamabad.

Separately, Pakistan Ambassador to Afghanistan Mansoor Ahmad Khan tweeted that NSA Moeed Yusuf called on Hanafi and discussed the strengthening of brotherly relations between Pakistan and Afghanistan to promote trade, transit and connectivity. In this regard, the statement by the presidential palace said Hanafi urged Pakistani business leaders and investors to invest in Afghanistan’s energy, mines and agriculture sectors.

He stressed the need for the implementation of major regional projects, including the Turkmenistan-Afghanistan-Pakistan-India gas pipeline (Tapi), Turkmenistan-Afghanistan-Pakistan 500-kV Line (TAP-500) project and the Central Asia South Asia Electricity Transmission and Trade Project (CASA-1000), for the import of electricity from two Central Asian countries by Afghanistan and Pakistan. “Pakistan and Afghanistan are two brotherly neighbouring countries which have historical, religious and brotherly relations and I am confident that the[se] friendly relations will be durable,” Hanafi said and thanked Pakistan for helping and hosting refugees from Afghanistan.

He said Afghanistan wanted good relations with Pakistan, based on mutual respect, and the promotion of trade and transit relations between the two countries.

For his part, NSA Yusuf emphasised that peace and stability could not be ensured without establishing economic relations and said the expansion of trade and transit ties were important for both countries. “Pakistan is committed to the full implementation of major projects and both countries should form a team of private sector to hold talks about the expansion of health, education, trade, mines, information technology,” he said, according to the statement.

Both sides also discussed ways to ensure more facilities for Afghan passengers and patients at the Torkham and Spin Boldak gates, the statement further said.