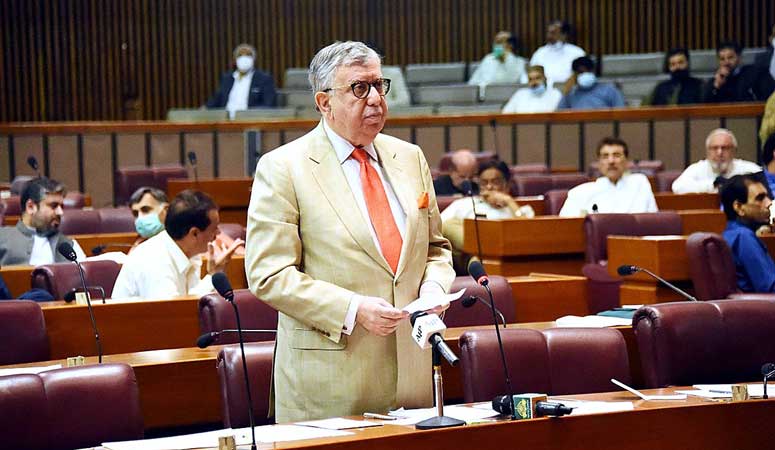 The Senate Friday passed the State Bank of Pakistan (Amendment) Bill 2021 amid the opposition protest on suffering back-to-back defeats in the House despite commanding majority.

When Federal Minister for Finance and Revenue Shaukat Tarin tabled a motion seeking permission to introduce the SBP bill, the opposition members objected to it.

A motion was put forth to vote through division and was carried by 44 against 43 votes, marking the first blow to the opposition in the day.

Earlier, the motion on the bill was passed with a tie-breaking vote of Chairman Muhammad Sadiq Sanjrani as the both treasury and opposition benches’ votes were 43 each.

The bill was passed by a majority vote as the opposition kept on expressing its reservations, says a news report. On January 13, the National Assembly passed the SBP autonomy bill along with the supplementary finance bill – both these bills were a requirement by the International Monetary Fund (IMF) programme. The approval of the State Bank amendment bill was necessary to ensure Pakistan’s sixth review of the $6 billion Extended Fund Facility (EFE) gets cleared by the IMF’s Executive Board which is scheduled to meet on February 2 to decide the disbursement of the $1-billion tranche. The Senate session has been adjourned till Monday 3pm.

During the session, 12 members were absent, including eight members of the opposition, two of the government and two from independent candidate Dilawar Khan’s group. PPP’s Yousuf Raza Gillani, Qasim Ranjho and Sikandar Mendro did not attend the session. Among Opposition members, Pashtoonkhwa Milli Awami Party’s Shafiq Tareen and Naseema Ehsan did not attend the meeting.

Meanwhile, JUI’s Talha Mahmood and Hidayatullah and Hilal-ur-Rehman, two of the six members of the Dilawar Khan group, were absent from the meeting. Among the government allies, Senator Faisal Sabzwari and Khalida Ateeb of MQM were absent from the meeting. Earlier, PPP Senator Sherry Rehman via Twitter lashed out at the PTI-led government for stripping the country of its autonomy to make decisions by trying to bulldoze the State Bank of Pakistan (Amendment) Bill 2021.

In a series of tweets, Rehman took exception to the issuance of the agenda for today’s meeting of the Senate. The senator said that issuing the agenda at such a juncture was “unprecedented for government’s standards of parliamentary manipulation”, which also was proof of the government’s “intimidation”.

“This is how the government is trying to bulldoze the SBP’s ‘autonomy’ bill, whereby it strips the country of its own ability to make sovereign decisions in times of national crises,” she wrote.

“Such terms are unheard of and rejected by the joint opposition,” she asserted. “Did we hear the finance minister say the central bank should advise the commercial banks that the government may default on its domestic debt? What is going on here? The borrowing has gone through the roof, but this is quite unprecedented,” Rehman concluded.

However, after the session resumed, the finance minister presented the bill. The bill received 43 votes in favour and 43 votes against it. With Sanjrani voting in favour of the bill, the PTI government managed to clinch victory. After the bill’s passage, the opposition raised slogans against the government and tore up copies of the bill. They also demanded a recount of the vote, but the Senate chairperson prorogued the session.