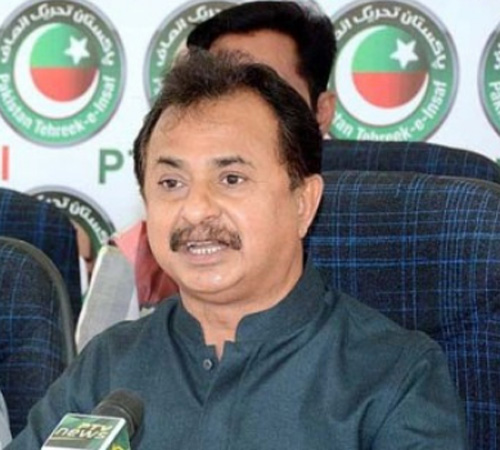 Leader of the Opposition in Sindh Assembly Haleem Adil Sheikh on Friday demanded of the provincial government to pay outstanding salaries of 9 months to vaccinators as vaccination process in Karachi was being affected due to their protest while cases of COVID-19 were on rise.

Haleem Adil Sheikh, accompanied with MPA Arslan Taj Ghumman and other PTI leaders paid a visit to Karachi Expo Center where the largest vaccination center of Pakistan was set up to ensure vast scale immunization for curtailing spread of COVID-19.

The vaccination process was on halt for last many days as vaccinators and I.T experts serving there were on protest due to non payment of salaries from previous 9 months.

Haleem Adil Sheikh, while speaking to media persons at the occasion, expressed annoyance and regrets that young vaccinators and other allied staff who were front line fighters in war against the pandemic were not only deprived of their salaries but they were also being paid salaries lower than the minimum threshold set by Sindh government.

He said that Sindh government in budget 2021-22 set minimum wages at Rs 25000 per month but salary of staffers of vaccination centers was Rs 18000 per month and even that meager amount was not being paid to them.

The federal government allowed use of Expo center as mass vaccination center and also provided jab doses worth over Rs 45 billion to provincial government that itself did not procure a single dose so far, he said adding that the inefficient Sindh government could not pay salaries to hired staff while thousands of jabs doses were left to expire and thousands other were sold illegally to private vendors.

Besides, incident of inoculation of expired vaccine to police personnel in Khairpur Mirs was also reported in media, he added.

The opposition leader pointed out that Rs. 5000 million were earmarked as Corona emergency funds while deduction was also made from salaries of elected representatives and government employees in the name of Covid emergency fund. “Nobody know where those billions of rupees were spent,” he exclaimed.

Haleem Adil said that another mass scale corruption surfaced in Covid-19 diagnoses and reporting as Rs 35 million were issued to Liaquat University of Medical and Health Sciences (LUMHS) Jamshoro on a counterfeit letter. An inquiry was also notified in the regard but not a single meeting of the inquiry committee was held so far and the PPP government wanted to suppress the issue.