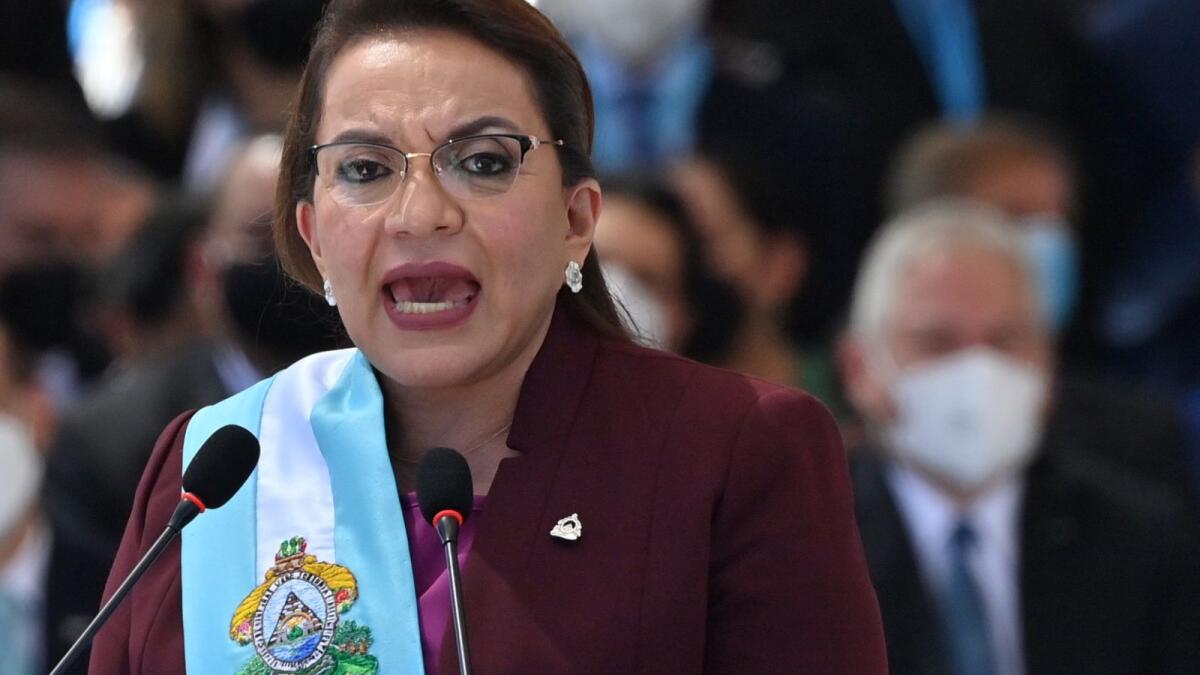 TEGUCIGALPA: Leftist Xiomara Castro was sworn in Thursday as the first woman president of Honduras, vowing to reform the crime-and-poverty-stricken nation into a “socialist and democratic state.”

Castro, 62, took the oath at a massive ceremony attended by international dignitaries after an embarrassing week of fighting within her party that challenged her authority.

In her first official address at the Tegucigalpa National Stadium, Castro denounced “the social and economic tragedy confronting Honduras” and promised to make work of improving education, healthcare, security and employment.

She said she was inheriting a “bankrupt” country which she intended to reshape into a “socialist and democratic state.”

Honduras’s public debt is about $17 billion.

The oath was sworn before Judge Karla Romero, flanked by Castro’s choice of Congress president, Luis Redondo, who draped the presidential sash over his new boss before a crowd of about 29,000.

Castro’s election last November brought an end to 12 years of right-wing National Party (PN) rule that followed the ousting of her husband Manuel Zelaya as president in a 2009 coup.

But the lead-up to the swearing-in was marred by a disruptive rivalry within her Libre party, which is in a majority alliance in Congress.

Libre factions split on who should be the legislature´s new president, coming to blows in the Congress chamber and then holding rival inaugural sittings.

Castro accused supporters of Redondo’s rival for the Congress presidency, Jorge Calix, of being in cahoots with the PN and other forces she said wanted to undermine her anti-corruption drive.

Juan Orlando Hernandez of the PN, her predecessor, is accused by US prosecutors of protecting drug traffickers in exchange for bribes. Castro assumes office with a full load of tasks ahead of her. Hondurans are fleeing the country in droves, often to the United States, in search of work and a better life.

Castro spoke of a poverty rate of 74% a figure she said “in itself explains the caravans of thousands of people of all ages fleeing to the north — Mexico and the United States — looking for a place and a way to survive in spite of the risk to their lives” from gangs and smugglers along the way.

“Everyone wants to leave because there’s no work. If there were more job opportunities here, there would be no need to look for another country,” university student Jensi Davila told AFP in Tegucigalpa.

Adding to the exodus, Honduras’s murder rate is nearly 40 per 100,000 inhabitants.

Among the crowd celebrating Castro’s inauguration, seamstress Esther Lopez expressed hope that the situation “is going to change, because Xiomara has been supporting the cause of the poor for many years and because of ‘Mel’ Zelaya, who was a good president.”

Harris urged Castro to fight corruption, seen as a root cause of Central American migration, in talks after the inauguration ceremony.

The first foreign official to have a bilateral meeting with Castro, Harris welcomed the priority the new president had placed “on countering corruption and impunity, including her intent to request the assistance of the United Nations in establishing an international anti-corruption commission,” a readout from Harris’s office said.

It is an issue, according to former prime minister Edgardo Paz, which requires agreement “with the multilateral institutions where Washington has a lot of influence.”

Castro also held a meeting with Lai, who conveyed Taiwan President Tsai Ing-wen’s congratulations to Castro on becoming Honduras’s first woman leader, according to a statement from Tsai´s office.

Honduras is one of just 14 countries to recognize Taiwan. China, which considers Taiwan part of its territory, has spent decades encouraging the island’s allies to switch sides, with much success. On the election campaign, Castro vowed to “immediately open diplomatic and commercial relations with mainland China” if she won.

According to the presidential statement, Lai — who came bearing a consignment of Covid-19 prevention supplies — said he invited Castro to visit the self-ruled island, adding that a meeting between Taiwan and Honduras´s first woman presidents would be a historic moment.

Separately, Harris and Lai had a brief exchange at the inauguration, Taiwan’s Central News Agency said, an encounter that will likely stoke US-China tensions.

They shared “a simple greeting” in which both “spoke briefly,” the agency said.

Their conversation was the first public interaction between the US and Taiwanese vice presidents since Washington switched diplomatic recognition from Taipei to Beijing in 1979, according to Fan Shih-ping, a political analyst at Taiwan’s National Normal University.

Castro announced part of her cabinet Thursday, with her son Hector Zelaya as private secretary and Jose Manuel Zelaya — her husband’s nephew — as defence minister.