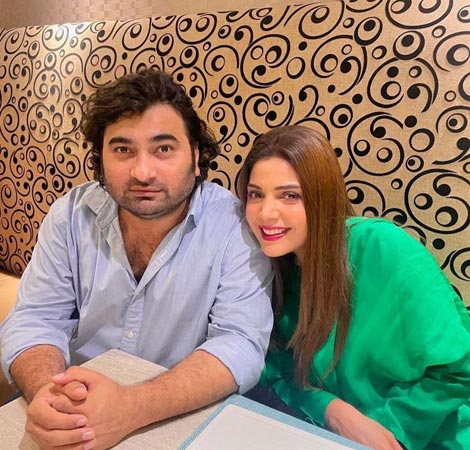 Singer-turned-actor Hadiqa Kiani is very happy to have worked with director Danish Nawaz and her recent post on Instagram is proof of that joy.

Nawaz is the director of the HUM TV drama Dobara, a show that has many people talking because of its main character Mehru. The drama shows Mehru’s personal ‘reawakening’ after her husband passes away. She’s a woman whose own sense of self was stifled by her husband’s desires of how he wanted to see her during their marriage. The drama has been written by written by Sarwat Nazir and produced by Momina Duraid Productions.

Kiani posted a picture of herself with Nawaz on Instagram and wrote a few words. “I wanted to take a moment and appreciate the director of Dobara, the incomparable Danish Nawaz,” she shared.

“Aside from being incredibly hardworking, talented, respectful and honest, Danish has a keen eye for detail. He truly understood soul of Dobara and directed it in a manner that highlighted the key nuances of the script and its characters. So grateful to have had the opportunity to work on this project with such a fantastic team.”

For Kiani, her role in Dobara is a chance at self-discovery, or as Kiani put it in an interview she gave in December, it’s a chance to “un-peel myself layer by layer”. It is important for Kiani to find herself through the characters she chooses to do, characters that are drowning in “the feeling of loneliness, suffocation, other people defining your life and navigating you”.

Dobara is Kiani’s second television project. Her debut drama Raqeeb Se was a hit with both viewers and critics because of its nuanced script, unique characters and stellar performances by the cast.

This isn’t Nawaz’s first successful project either, of course. He was also the director behind the acclaimed 2021 drama Chupke Chupke that starred Osman Khalid Butt, Ayeza Khan and Mira Sethi amongst others.