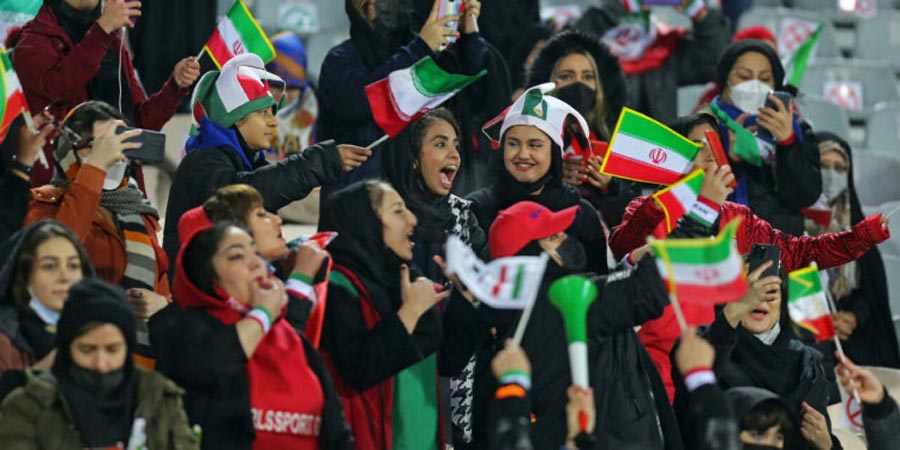 TEHRAN: Mehdi Taremi was on target as Iran confirmed their spot in the 2022 World Cup finals in Qatar with a 1-0 victory over Iraq at the Azadi Stadium in Tehran on Thursday. Porto forward Taremi scored the winner after 48 minutes to send Iran through to a World Cup finals for the sixth time, and third in a row. Iran are unbeaten in the third stage of qualifying, having won six of their seven matches, with a draw against South Korea. Team Melli consolidated their position on top of the Group A table with 19 points, two points ahead of South Korea. They extended their impressive unbeaten run since Croatian head coach Dragan Skocic took over in February 2020, with 11 wins and one draw. On Thursday, they recorded their second win over Iraq on the road to Qatar.

Meanwhile, Iranian women were allowed Thursday for the first time in almost three years to attend a football match of their country’s national team in a Tehran stadium. “I am very happy. This is the first time I have attended a match at Azadi Stadium,” said a 26-year-old civil engineer who gave her name only as Mahya. She carried the national green, white and red flag, and covered her head with a grey scarf. The Islamic republic has generally barred female spectators from football and other stadiums for around 40 years. Clerics, who play a major role in decision-making, argue women must be shielded from the masculine atmosphere and sight of semi-clad men. World football’s governing body FIFA ordered Iran in September 2019 to allow women access to stadiums without restriction and in numbers determined by demand for tickets. A month later women were able to attend a 2022 World Cup qualifying match between Iran and Cambodia in Azadi Stadium. For the first match since then, 2,000 of the 10,000 tickets were exclusive to women on Thursday for the 2022 World Cup qualifier between Iran and Iraq, ISNA news agency reported. “I bought the tickets online and got an SMS confirming it,” Mahya said, adding that “if we win, we will go celebrate the victory in the streets.” She got her wish, witnessing a 1-0 home side win over Iraq.

Iran’s female fans sat behind the Iraqi goal. Wearing thick coats against winter’s chill, some had the national colours painted on their cheeks, and many carried Iranian flags or horns in the national colours. They sat apart from the men but united with them in supporting their side, with shouts of “Iran! Iran!” drowning out the few fans from Iraq. The two countries were at war for years in the 1980s. The 2019 FIFA directive, under threat of Iran’s suspension, came after a fan named Sahar Khodayari died after setting herself on fire outside a court in fear of being jailed for trying to attend a match. Dubbed “Blue Girl” because of the colours of the club she supported ––– Esteghlal FC ––– she had reportedly been detained in 2018 when she tried to enter a stadium while dressed as a boy. Her death sparked an outcry, with many calling for Iran to be banned and matches boycotted. Since Iran’s Islamic Revolution in 1979, women have borne the brunt of swift changes in the nation’s moral codes. FIFA had been pushing for years for Iran to open its stadiums to women, but Tehran had until 2019 only allowed a limited number of them to attend matches on rare occasions.