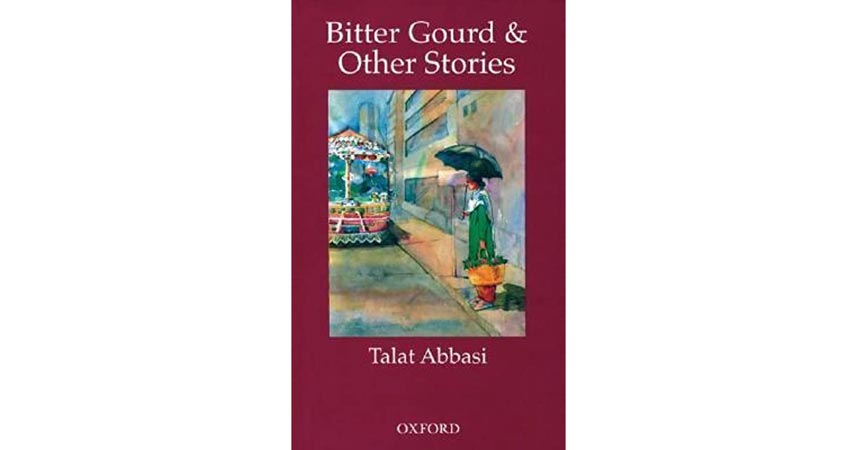 Talat Abbasi’s fiction reflects the life and plight of Pakistani women in the lower strata.

She also offers comparison between the upper and lower-class women. Talat Abbasi like Sara Suleri and Kamila Shamsie, is more interested in the life of Pakistani women in general, as compared to Sidhwa who speaks a lot about her Parsee community. The title Bitter Gourd and Other Short Stories is symbolic of the values of our society and sufferings of men and women because of some traditional values of our culture. It is because of the portrayal of women and their socio-political issues at center stage that most of her stories depict feministic trends as Muneeza Shamsie says, “The book, Bitter Gourd and Other Stories, is permeated with a feminist consciousness and her stories capture the predicament of women trapped in oppressive marriages”.

The title story ‘Bitter Gourd’ becomes representative of the voice of young sacrificing females who earn and provide for their siblings in case their parents die. The story portrays the life of Miss Nilofer and her mother. They are the women who belong to the poor stratum of the society where, they struggle to maintain their social standing. They keep linking them up with their rich relation who would provide for them. The struggle, which Nilofer wages along with her mother, is really the struggle of all such women who have to live without the help of their men and have to depend for support on their rich relatives. Struggle and the courage to survive is the principle in the minds of young women like Nilofer in the modern Pakistan. They are ready to face the bitterness of the relatives and the society in general, but would not budge from their stance. When the younger ones, especially males, become fully grown up and are expected to take their turn in giving back, the struggling elders, especially women, are denied their rights by the siblings and so, are left alone at the end of the day.

Abbasi, in the volume of short stories, has brought to light the portrayal of working widow women and their sufferings because of hard labour that women have to undergo. The story, ‘The Birdman’, throws light on the life of a sweeper-woman Shano whose husband, unfortunately died and afterwards, her in-laws upgraded their status as dependent on Shano. These in-laws not only got her money but also demanded an account of the money earned by her. She had no opportunity of spending for herself. Abbasi says that when the in-laws saw that she was losing money from her pay, a bit more every time, they beat her and warned her that there wouldn’t be a next time for forgiveness. They further threatened her that they would throw her out, even though she was their dead son’s widow.

The character of Shano is designed to show the aggressive yet vulnerable side of the female whose income is snatched from her and is accused of having illicit relations with the other people. She grows irritated at this and, at first, tries to find consolation in a bird, lovingly called ‘Mithoo’. Mithoo gradually becomes a symbol of silence because of his inability to speak. Mithoo, the parrot, is unable to speak other than uttering a few meaningless sounds, is another side of Shano because her voice is also stifled. Her stifled voice caused suffocation and so, she would revert to anyone who would listen about her plight. Such a situation, for a woman, makes her vulnerable to deceit and exploitation.

She falls into the trap of the criminals involved in the prostitution and human trafficking. One of them is Ghulam, the birdman gets a lot of money from her on the false hope of marrying her and taking her to Dubai. She gives her hard-earned money and faces the abuse of her in-laws at home because of the reduction of the amount of money. But, as ill luck would have it, she is abducted beyond recovery and falls into the ugly trap and den of the prostitution when her supposed lover Ghulam comes in a car to take her away from that hell to the paradise of Dubai. But in reality, she was now going into the hell of the criminal world because “they are all forgetting one thing-the most obvious really-that though it was broad daylight when the car drove off, inside where Shano sat, it was dark as night”. Shano’s story of being cheated in the name of love reverberates the story of Shanta in the novel ‘Ice Candyman’ by Sidhwa. But the fate of Shano is worse than Shanta because the latter is rescued to the normal life in the end of the story while in case of Shano, the writer leaves us thinking about the probable end of Shano without any possibility of rescue. Such simple, uneducated, and poor women would continue to be cheated at the hands of their false lovers if the society does not take positive steps to bring a behavioural change among the men of the society. Abbasi raises the issue of humiliation of women because of the crime of human trafficking and prostitution and, in this way, makes a powerful statement of the crimes against women and calls for the better environment for the protection and safety of women in Pakistan.