Will be more dangerous if ‘forced out of office’

* PM tells Nawaz Sharif to return and face criminal cases against him
* PTI govt will complete its current term and also return to government in next term
* Giving NRO to opposition will be akin to treachery
* Price hike a major issue which often keeps me awake at night: Imran 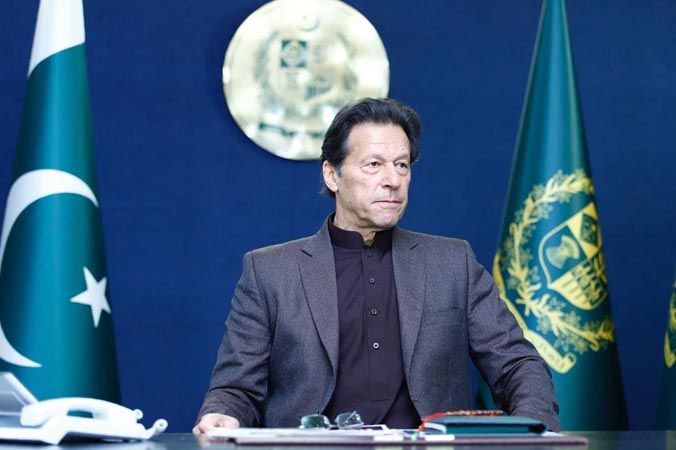 Prime Minister Imran Khan Sunday categorically said he would not meet Opposition Leader in the National Assembly Muhammad Shehbaz Sharif because it would amount to compromising on Sharif family’s crimes.

During the fifth session of live “AapKaWazirAzamAap Key Sath’ programme, the prime minister said he would not give Sharif’s family any NRO because doing so would be a huge treason with the country.

The prime minister said he did not consider (Shehbaz Sharif) as the opposition leader rather he treated him as a man who had committed serious crimes against the nation and country.

Responding to a query, the prime minister said the opposition leader had a stature but in the instant case Shehbaz Sharif was delivering lengthy speeches in the parliament without caring to give reply to a number of graft and corruption cases pending with the courts.

The prime minister said Sharif family should take some pity at this country. Expressing his wonder, he said by using delaying tactics in the courts, what kind of service they were rendering to the democracy and setting example for a civilized society! “If I meet him, it will amount to acceptance of their wrongdoings (corruption) as no longer a punishable crime in a civilized society,” he stressed. The prime minister said he wanted the nation to imbibe the basic principles taught by the Holy Prophet (Peace Be Upon Him) regarding the rule of law and equal treatment of all segments of society. He stressed that as followers of the Holy Prophet (PBUH), the nation should follow those principles.

He regretted that different trends had been set in the society for the powerful and the weak. The ordinary criminals were languishing in the jails and the powerful elite was residing abroad. Those criminals had been showered with flower petals.

If such were the standards in society, then set the jails open for the ordinary criminals, Imran said, adding that he was ready to talk to everyone, including TLP and Balochs, but would not talk to such elements who had siphoned off the country’s wealth, the prime minister elaborated.

He said according to the World Bank rule of law index, Switzerland topped the list with 100 percent score. In Singapore, a minister committed suicide due to his corruption and in the US a powerful family also followed the same course to avoid public shame. “Unless we follow the path of our Holy Prophet (PBUH), we cannot aspire to get prosperity,” he said, adding had no magic wand to right the wrong things.

The prime minister opined that a society had to fight such crimes and trends. To another question, he invited former prime minister Nawaz Sharif to return and face the criminal cases. “I am waiting for your return to Pakistan, please return back,” he added.

The prime minister said not a single party in the country ever brought supporters in huge numbers to Minar-e-Pakistan, and it was the PTI that did it by four times. He said the corrupt junta could not befool the public anymore. Though there was an issue of price hike, the public would not come out on the streets, as they understood two families’ theft and corruption.

The prime minister further said his party would complete its current term in power and also return to government in the next term, as it had tackled historic and huge economic challenges faced by any past government in the country’s history. He also warned the opposition parties that he would become more dangerous in case he was forced out of power. “You will not find any place to hide. Whatever you have done with the country, the people knew it very well, the volcano is brewing. They will flee the country and hide in London,” he added.

Referring to Nawaz Sharif, the prime minister said he would not return to Pakistan out of his love for the ill-gotten pelf.

Often, they floated rumours of deals to save their party from disintegration, he said, adding they were the elements whose time had run out. “The way they treated the country, the nation is not ready to pardon them,” he observed.

The prime minister said a three-time prime minister had been expressing his ignorance about the illegal accumulated wealth and the properties in the UK worth billion of rupees. “Even his sons were declaring themselves as citizens of the UK to evade accountability,” he added.

The prime minister ruled out any compromise with the corrupt leaders terming them as ‘the big dacoits of the country’. He said they wanted to blackmail him. But he would not grant them any NRO of Musharraf who by striking a deal with these two families had done grave injustice with the nation, worse than his imposition of martial law.

Due to such deal, the nation had to suffer. They now wanted to blackmail his government so that in the end, there could be a deal like Musharraf’s NRO, he said and compared such an act to committing the biggest treason with the country.

Responding to another question, Imran said that he wanted the young people to keep in mind Hadiths about the rule of law and verses from the Holy Quran over the duty of Muslim regarding spread of virtue and crushing of evil in a society.

He observed that if the nation understood these teachings, they would resolve many issues.

The prime minister said Quaid-e-Azam Muhammad Ali Jinnah had been a follower of those principles.

The doctrine of necessity was created for the powerful and elite classes, he said, adding that the cells in jails were filled with the ordinary criminals while the powerful dacoits were roaming freely.

The prime minister underlined the need for the society to face such challenges and make endeavours to crush the evil tendencies in the society which made the people to treat the corrupt elements as politicians and personalities. In that case, the people would have fears from committing crimes.

He further said that the two royal families in the country had been given VIP treatment which Aitzaz Ahsan had rightly termed Sharif’s doctrine.

They had bribed the judges in the past, that’s why Justice Khosa of the Supreme Court had equated them with the Sicilian mafia, he added. The prime minister, to a question, said his political opponents were raising hue and cry over the price hike to save their skins from accountability.

Citing a World Bank’s report, he said the bank had acknowledged that government had succeeded in reducing poverty in the four categories.

The country’s GDP had been increased by 5.37 percent despite the coronavirus challenge, which was also hurtling the global world economies. In India, the growth rate had been in the negative, he added.

To a question of Saeeda, a resident of Rawalpindi, the prime minister said it was an age of IT and mobile cells and within one hour, he got the information about the public issues.

He admitted that price hike was a major issue that often kept him awake. The prime minister said a good journalism always kept the people abreast of the latest situation and urged the need of projecting the issue with its true perspective.