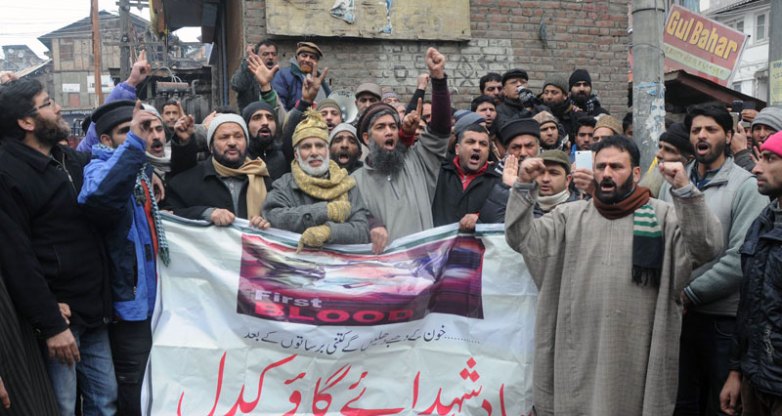 ISLAMABAD: All Parties Hurriyat Conference (APHC) leaders on Friday have paid glowing tributes to the martyrs of Gaw Kadal massacre on their 32nd martyrdom anniversary in Indian Illegally Occupied Jammu and Kashmir (IIOJK).

According to Kashmir Media Service (KMS), over 50 innocent people were killed in Gaw Kadal area of Srinagar on this day in 1990 when Indian forces had opened indiscriminate firing on peaceful demonstrators who were protesting against the molestation of several women by troops, the previous night.

The illegally detained APHC Chairman, Masarrat Aalam Butt, in a message from New Delhi’s infamous Tihar Jail eulogized the sacrifices of the martyrs of Gaw Kadal. He thanked the freedom loving Kashmiri people for observing shutdown and organizing prayer meetings in memory of the martyrs who have sacrificed their precious lives for the sacred mission of freedom from Indian subjugation.

The APHC Chairman also condemned the authorities for disallowing Juma prayers at the Jamia Masjid, Srinagar. He urged the UN Secretary General, Antonio Guterres, to take steps for resolving the Kashmir dispute in accordance with the UN Security Council resolutions and Kashmiris’ aspirations.

APHC leader, Chaudhry Shaheen Iqbal, in a statement issued in Srinagar, paying tributes to the victims of Gaw Kadal tragedy, said that the incident was a milestone in the history of Kashmir. He said, the Indian troops are committing serious crimes in the territory and until the perpetrators are brought to book, the loss of innocent human lives in IIOJK will continue and uncertainty will increase.

APHC leaders Khadim Hussain and Maulana Syed Sibte Shabbir Qumi in a joint statement in Srinagar said that the massacre of Gaw Kadal on January 21, 1990 was a clear example of Indian brutality against the innocent Kashmiris. They said that in the last 32 years, there had been dozens of such massacres in the occupied territory at the hands of ruthless Indian troops but the Kashmiris had not given up and they were standing firm against the illegal Indian occupation of their homeland.

APHC leader Advocate Arshad Iqbal in a statement issued in Srinagar, terming the tragedy as the worst kind of state-terrorism, said on that fateful day, a crackdown was also carried out in Chota-bazaar area of Srinagar where thousands of men, women, children and elderly were subjected to severe torture and humiliation. He reiterated the Kashmiris’ pledge to take the ongoing freedom movement to its logical end despite all odds. He also appreciated the Legal Forum for Kashmir for effectively raising the Kashmir dispute at the international level.

APHC leader, Javaid Ahmad Mir, in his statement in Srinagar paid homage to martyrs of Gaw Kadal and his father Gulam Nabi Mir. He said that his father was arrested by BSF in 1990 along with other prominent Kashmiris and subjected to severe torture in custody for nine months. He said that the inhuman torture resulted in paralyses of his arms and legs that later became the cause of his death.

APHC-AJK leader Shafiq-ur-Rehman in his statement in Islamabad, terming the incident as one of the brutal massacres in Kashmir’s recent history, said that despite the passage of over three decades the victims of the Gaw Kadal massacre were still wandering from pillar to post in search of justice. He said that the international community must hold the Indian government accountable for its war crimes in the occupied territory.

Leader of AHPC, AJK chapter, Mehmood Ahmad Saghar, in his statement in Islamabad said, the massacre is one of the most horrific incidents of mass-killings in the history of Kashmir that will continue to bruise the hearts and minds of the Kashmiri people. Lauding the supreme sacrifices of the Kashmiri martyrs, he said, “We are indebted to the martyrs who laid down their lives for the sacred cause.”

AHPC-AJK leader, Imtiaz Wani, in a statement in Islamabad termed the incident as the worst type of Indian state terrorism in IIOJK.

APHC-AJK leader, Mushtaq Hussain Gilani, in his statement in Islamabad said that the Kashmiris could never forget the Gaw Kadal massacre perpetrated by Indian forces in 1990. He deplored that the Kashmiris had always been victims of Indian state terrorism as in 1947, India, under a well-conceived plan, martyred at least 300,000 innocent people with the help of extremist Hindus in Jammu and since then the Kashmiri people had been the victims of Indian tyranny.

APHC-AJK leader Shafiq-ur-Rehman in his statement in Islamabad, terming the incident as one of the brutal massacres in Kashmir’s recent history, said that despite the passage of over three decades the victims of the Gaw Kadal massacre were still wandering from pillar to post in search of justice. He said that the international community must hold the Indian government accountable for its war crimes in the occupied territory.