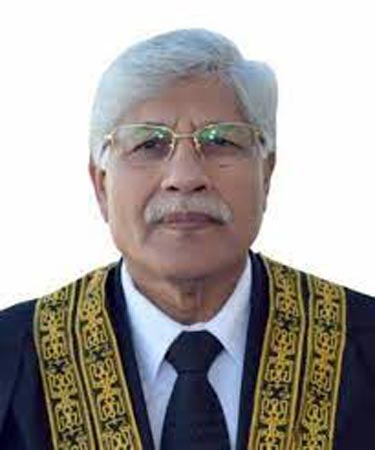 The Islamabad High Court (IHC) Thursday charged Gilgit-Baltistan (GB) former chief judge Rana Shamim with leveling allegations against former chief justice of Pakistan Mian Saqib Nisar in a signed affidavit in London. Chief Justice Athar Minallah read out the whole judgment in which he ordered that charges be framed against Shamim. However, the court decided not to frame charges against Mir Shakeel-ur-Rahman and senior journalists Ansar Abbasi and Aamir Ghauri after a request from Attorney General for Pakistan (AGP) Khalid Jawed Khan and amicus curiae Reema Omer.

Nasir Zaidi, Faisal Siddiqui, Ansar Abbasi and the publication’s editor-in-chief were present in the courtroom.

The contempt of court case pertains to publication of an affidavit containing serious allegations that ex-chief justice of Pakistan Saqib Nisar attempted to influence a case against former prime minister Nawaz Sharif and his daughter, Maryam Nawaz.

When ex-president Pakistan Federal Union of Journalists (PFUJ) Afzal Butt was called on, he said journalists were conducting meetings on reporting court stories.

“A code of conduct would be published soon.” Butt told Justice Minallah, “I am ready to say on oath that journalists have faith in this court and we believe that the court is the last hope.”

Justice Minallah then told Rana Shamim that the court would frame charges against him, but the ex-judge requested that the charges be framed at a later date, as his lawyer was not present.

Reading out the charge sheet, the chief justice said, “Shamim’s affidavit was recorded in London and despite the ex-judge admitting that the document could have been leaked, he did not take action against Ansar Abbasi and the notary office in Britain’s capital.”

“You tried to scandalize the court and now that the charges have been framed against you in the open court, what do you have to say?” justice Minallah asked Shamim.

At this, the ex-judge asked Justice Minallah to hand him a copy of the document, which included the charges against him.

“Do you accept the charges or not,” asked Justice Minallah to which Rana Shamim said he accepted some charges and disagreed with some.

Justice Minallah told the ex-judge that he could submit in writing if he wanted to defend himself.

Responding to the chief justice, Rana Shamim said, “If you have decided, then punish me, hang me if you want; why are you singling me out?”

Rana Shamim requested the court for justice to prevail, saying an affidavit of the former CJP was also crucial in this case, as he had asked the court to also seek Nisar’s response.

“Former chief justice’s affidavit should be presented before the court and an opportunity should be given to cross-examine him.”

The ex-judge further argued that until it was proven that the facts mentioned in his affidavit were false, a case of criminal proceedings could not be filed against him.

He mentioned that he had “no plans” of publishing the affidavit, as he praised the judiciary, saying he respected the court, whose judges made decisions in line with the law.

“I request the court that an inquiry into the affidavit be conducted instead of framing charges,” he said.

At this, Justice Minallah asked Rana Shamim if he had ever heard a contempt case, as he was a former chief justice himself.

“No, I have never heard such cases, nor do I believe in the concept of contempt,” Rana Shamim responded.

At this, Justice Minallah explained to Rana Shamim that despite the framing of charges, he would still be given the chance to defend himself.

Moreover, adjourning indictment against the journalists, Justice Minallah said if it was found during the trial that the news story was published deliberately, action would be taken.

After the arguments, Justice Minallah adjourned the proceedings till February 15 and asked Rana Shamim to present his written response.