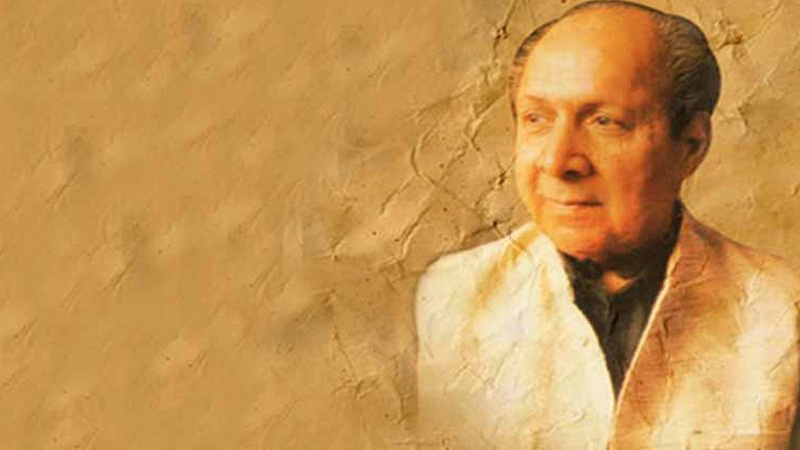 I was shocked when I listened to Qateel ShifaI’s famous song ‘Ulfat Ki Nai Manzil Ko Chala’ now ruined by Yesudas in KalyanJi AnandJi’s music for an Indian film.

Though I am a fan of Yesudas and KA for their other works but this song in a different tune disappointed me since it was already an established number liked both by Indian and Pakistani music lovers. The cohesiveness of the instruments with vocals was missing in the Indian version. Qaeel Shifai’s reputation as a lyrical poet had already reached Bollywood, so in 1970’s and 1980s he stared visiting Mumbai to write songs. He mentioned to me in an informal encounter that he used to stay in a rented flat on his own with a locally hired cook and worked for Bollywood films from there with no financial burden on his producers. In the process he not only wrote new songs but also sold his already famous numbers from his Pakistani films. I supported him for the former but not for the latter part of his statement.

Jagjit Singh laid his hands on Qateel’s famous Ghazal ‘Yei Mojaza Bhi Muhabbat Kabhi Dikhaye Mujhe’ in a composed Ghazal format singing whereas Mehdi Hassan’s version was already established and popular in Khuli Ghazal singing style. Similarly the song ‘Kyun Hum Sei Khafa Ho Gaye’ by Mehdi Hassan for the film ‘Salam-e-Mohabbat’ filmed on Muhammad Ali was an established tune by Khwaja Khursheed Anwar. Despite this, it was sung by Jagjit Singh in the same tune. He seemed struggling to reach to Mehdi Hassan’s level of rendering.

Qateel’s Pakistani films: We can talk about Qateel’s contribution to Bollywood endlessly but we are more concerned with his contributions in Lollywood. He was born in Haripur Hazara on December 4, 1919. When he was 28, his first assignment in January 1947, was on the invitation of Lahore-based film producer, Dewan Sardari Lal before the creation of Pakistan. Prior to that Qateel was doing menial business and jobs. He started his own sporting goods shop. Being unsuccessful in his business, he decided to move from his small town to Rawalpindi, where he started working for a transport company.

The first film for which Qateel wrote lyrics was ‘Teri Yaad’, Pakistan. He was assistant lyricist to Tanvir Naqvi for this movie. This film was directed by Daud Chaand and music was by Inayat Nath, who was Asha Poseley and Rani Kiran’ father. Nasir Khan, the hero went back to India. He was Dilip Kumar’s younger brother and his films Nagina and Ganga Jamuna in India became popular later on. This movie was flop despite that many disagree with this conclusion as it ran for five weeks both in Lahore and Karachi competing with Indian films released in Pakistan.

Qateel worked as assistant lyricist to some of the famous poets/lyricists for some time; from 1948 to 1955. With passage of time he became a highly successful film lyricist of Pakistan and according to Wikipedia he competed with big names such as Kaifi Azmi, Amrita Pritam, Majrooh Sultanpuri, Sahir Ludhianvi, Majaz Lucknawi, Tanvir Naqvi, Saifuddin Saif, Ahmad Faraz and Muhammad Hasan Askari. It is amazing how he managed his poetic interest alive despite the fact that his father was a businessman and there was no tradition of saying poetry in his family. Qateel did not lose hope and started taking informal tutelage from Hakeem Yahya Shifa Khanpuri. This association converted his name as Qateel Shifai from Muhammad Aurangzeb. He derived his poetic surname ‘Shifai’ from this association. He started getting guidance from Ahmad Nadeem Qasmi who happened to live in the same neighbourhood.

AUTOBIOGRAPHY —Qateel Shifai started work on his autobiography “Ghungroo Toot Gaye” with the assistance of his pupil, now a famous Urdu poet, Naeem Chishti in 1988. It took him long to complete his autobiography. Naveed Qateel, his son completed the book and published it after his death in 2006. The book broke out many hidden facts about film industry and literary circles and revealed some interesting facts from the personal lives of legendary personalities like Sahir Ludhianvi, Nurjehan and Iqbal Bano.