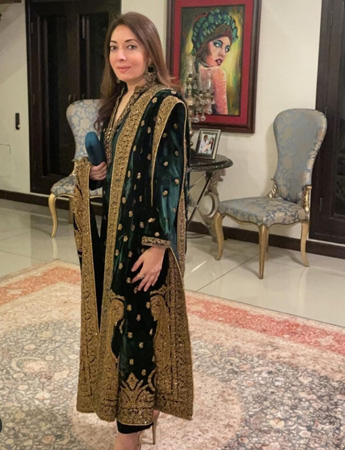 In a video captured by Nadia, she could be seen poking fun at the politician’s mother by sarcastically praising her makeup. The video angered Sharmila, who in turn, decided to pursue formal action against Nadia.

Speaking to The Current, the PPP leader expressed her anger over the incident.

“I inboxed and said it is very shameless of you to do this,” she said.

To which Nadia, according to Sharmila, replied, “There is nothing wrong in this. I have not asked anything wrong and I have not done anything wrong. Stop using harsh words with me.” Sharmila added, “She is shameless and heartless and it’s very unfortunate. I have a lot of respect for people in showbiz, they work really hard.”

She then emphasised said that her mother is a very “simple woman” adding that she had lost her husband three months ago. “My mother was at Saboor Aly’s wedding. She is trying to survive without her husband,” she said adding,

“You don’t have anything else to do so you want to get publicity and ratings by making such videos,” said Sharmila.

Sharmila further said, “Even if there was someone else in place of my mother, I would have taken action.”

Speaking about the legal steps she is taking the PPP leader said that she will be approaching cybercrime to get the video removed.

“I’m taking this to the head of cybercrime. I’m going to write them officially today and I’m going to take it to every forum. This is not how things are done.”

“You cannot use women or anyone else or even men to ridicule them, just for the sake of your own publicity, and free publicity. I as a woman, as a mother as a daughter will not tolerate this.”